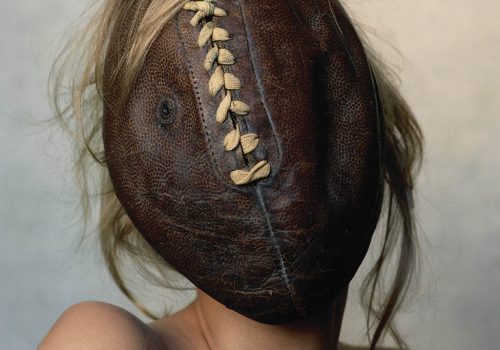 The MEP acquires 46 iconic works by Irving Penn—one of the twentieth century’s most important photographers, respected equally in the fields of fashion, portraiture and still life.

Bolstering one of the most extensive collections of Irving Penn in a European institution, this landmark acquisition of works—selected jointly by the MEP team and The Irving Penn Foundation—will complete the institution’s collection, permitting the MEP to offer a curated retrospective exhibition for touring purposes in Europe and beyond. While some of the artist’s series had already been well represented in the MEP collection (including key works in fashion, the nude, classic portraits and iconic works like The Hand of Miles Davis), other important bodies of work had been absent or only represented by individual works. This new acquisition will result in a comprehensive and holistic overview of Penn’s work and career comprising 109 works from 1939- 2007.

The selection includes rare vintage prints of some of Penn’s earliest photographs—made between 1939-41 in New York, the Southern United States and in Mexico—which reveal his early interest in vernacular subjects and precise documentary style. These early works also include Theatre Accident, a dye transfer print of one of Penn’s first colour still life works, made in 1947 for Vogue magazine.

Among the portraits joining the collection include a rare group of so-called ‘corner’ portraits, made with a highly original set constructed by Penn from stage-walls, boxes and carpets, and which include the icons Edith Piaf, Elsa Schiaparelli, and Le Corbusier; works from the series Cuzco, made in a daylight studio in Peru; stunning platinum-palladium prints from the series Small Trades made in Paris and London in 1950 and New York in 1951; as well as key portraits and ethnographic works made in the 1960s in Crete, Spain, San Francisco, Dahomey (present day Benin) and Nepal.

Other significant additions to the MEP collection include works from the celebrated still life series Cigarettes (1972), Cranium Architecture (1986) and Underfoot (2000), as well as colour still life works made from the 1980s onwards. Photographs from Penn’s decades long collaboration with the Japanese fashion designer Issey Miyake are included, as well as the 2007 still life Fallen Pitcher, one of Penn’s very last works, one that is emblematic of his continuous and inexhaustible search for perfection.

The acquisition comprises 26 gelatin silver prints; 11 hand-coated platinum- palladium prints, (joining the 24 platinum-palladium prints already held in the MEP collection) which demonstrate the unparalleled mastery in texture and contrast that Penn achieved in this process over a lifetime of technical and artistic experimentation; and 9 colour works, including rare dye transfer prints, Cibachromes, as well as chromogenic prints and Penn’s unique digital inkjet prints.

“My father had a very strong attachment to the MEP which we had visited when it was still in construction in the 1990s. The Irving Penn Foundation wanted to stay faithful to this long-standing relationship. I suggested to the MEP that they make a list of things missing from their collection, and which interested them in the work of my father. The Irving Penn Foundation made a list of available works from which the MEP were able to make the final selection.” – Tom Penn, Directeur de la Fondation Irving Penn.

“I would like to salute the vision and generosity of Tom Penn and The Irving Penn Foundation, who continue to honour the legacy of Irving Penn, by ensuring that his timeless work reaches great collections and can be seen by audiences around the world.” – Simon Baker, Director, MEP

This major acquisition -which has a total market value of over $2,000,000- is made possible by the generosity of The Irving Penn Foundation under the conditions of a charitable sale. The MEP would like to thank The Irving Penn Foundation for its continued support, as well as Peter MacGill and Kim Jones at Pace / MacGill gallery for their invaluable help. The MEP also thanks the Etrillard Foundation and the Collector’s Circle of the MEP, without whom this acquisition would have never been possible, as well as the City of Paris for its essential support.