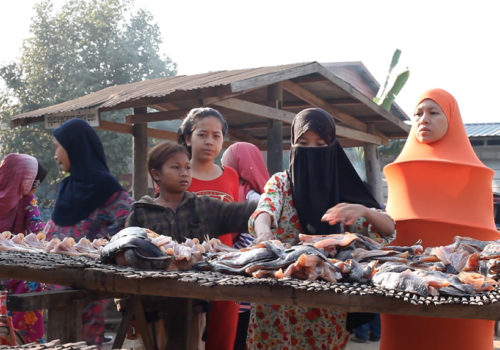 Being the longest river in Southeast Asia, the Mekong goes from China, crossing and bordering Myanmar, Laos, Thailand, Cambodia and Vietnam. For centuries these populations have depended on the river and its tributaries for food, water and transport, shaping their life and culture along its magnificent watercourse.
Worldwide the Mekong is known for its arresting landscapes. From deserts to flourishing vegetation, the river offers life and death to its inhabitants. At the same time, the rapid transformation of its indigenous communities towards global societies and invasive human intervention is jeopardizing the river cultural identity.
The artists and works featured in WATER/ Life Line bring together diverse stories from the Mekong countries about their relationship with water: how the river pervades their lives, its impact on the surrounding landscape and how this rapidly transforming region adapts to global expectations.
By featuring an array of telling images and personal stories of the communities living on the riverbanks, the viewer is immersed in the spectacle of nature, at times indulgent while at other times unforgiving.

Piayatat Hemmatat (Thailand)
‘Landscape’ is my alternate reality, born of seven years of continuous expeditions since 2007, a much needed remedy for my senses–world-weary, damaged and benumbed. Modern human society disconnects us from our own humanity by constantly distracting and exploiting our senses; making us fearful and afraid to think, leaving most of us in poverty, addicted to entertainment, so that we worship objects while polluting our living planet. Giving a more sinister meaning to the concept of survival.
When I became interested in photography, my first attempt was ‘Landscape’. Although it was a failed attempt, the fascinating experience of my first trip exploring nature was profound. The feeling of venerability and helplessness were illustrious, all I could do was surrender and be respectful to everything around me. I experienced and came to believe in nature’s beauty, terror, wonder and mystery. These elements inspire me to use my instinct, senses, intuition and imagination in order to create. This was for me a brand new revelation and I was convinced that all the answers I need for my existence are in nature.
Although I later ventured into exploring different subjects of photography, I will always return to ‘Landscape’ whenever I can for the unique humbling experience  nothing in life can offer. ‘Landscape’ is my collection of the most sobering experiences, that ultimately made me aware of my soul and existence as a human being.
Piyatat Hemmatat
April 2014, Bangkok

Piyatat Hemmatat was born in 1976 in Bangkok, Thailand. In 1991. Hemmatat received his Bachelor’s in fine art from City and Guilds London Art School in 2001, where he developed his passion for photography. He went on to complete his Master’s in fine art at the Chelsea College of Art and Design in 2002.
In 2010 he founded RMA Institute, Bangkok. Named in memory of his grandmother, RMA Institute is a creative space, which holds exhibitions by local and international artists, as well as hosting creative workshops.

Nge Lay (Myanmar)
presented by Yone Arts Gallery
Nge Lay is a stunningly versatile artist whose ability to cross mediums is fueled by an intuitive inquiry of the shadow. From her 2010 photographic series, The Relevancy of Restricted Things to her current exploration of the Wah (“pig in Myanmar), she explores the forbidden, the empty, and the forgotten with such intense focus on creative process that these difficult subjects become manageable and, ultimately, beautiful unique objects of art. Nge Le’s Relevancy of Restricted Things series was inspired by the loss of her father when she was a young girl. As such it is an exploration of the missing patriarch, both in Nge Lay’s own family cosmogony and in the lives and families of a remote Myanmar village. Observing of Self on Being Dead is another series initiated by Nge Lay’s insatiable curiosity for the shadow. Here she presents herself as an abandoned corpse and leaves the mystery of her death for the viewer to ponder. The sheer beauty of her images engenders awe at the very spectacle of death and we find ourselves wondering, not merely, “How did she die?” but “How sublime is death.”

Thao Nguyen Phan  (Vietnam )
Mekong Mechanical is a short film taken entirely using a point-and-shoot digital camera. My idea for the project evolved when I went to the Cuu Long delta in South Vietnam and visited catfish factories in an industrial zone. The Mekong region is one of the most dynamic socio-economic developments of the region. The film’s protagonist is a young female worker. At the time she was unaware that she was being filmed. I pair one scene from outside of the factory next to one repeated scene from inside the factory.
Mekong Mechanical Artist Book is a unique artist book that is a combination of photographs and silk paintings. The book cover is made using the Khmer scarf, a traditional fabric that was popularized in Vietnam by the Viet Cong. The scarf is now widely used in the Mekong delta region. In the book, I pair one photograph next to one silk painting. The silk paintings depict the silhouette of the machineries in the fish factory. Next to a painting is a photograph that depicts details from the worker’s clothing. The workers hand-embroider their name and insert decorative motifs on their aprons.
The book, in accompaniment with the video, is about the idea of parallel worlds. I pair images that are outside/ inside, transparent/ opaque, painting/photograph. I think about the process of development and how it deeply affects our surrounding landscape and our economy. I also consider how the people are identical in their uniform but still silently protest against homogeneity.

Bounpaul Phothyzan (Laos)
presented by Mgallery
Bounpaul Phothyzan is an emerging contemporary artist in Laos and currently lives and works in Vientiane. The artist’s practice centers on performance and art installation , exploring issues relating to environmental activism and social change
Phothyzan explores issues relating to environmental activism and social change through performance and art installation . We Live is a site-specific land art installation that was created in Bolikhamxay Province, Laos. To explore the consequences of politicised environmental damage, the artist initiated a collaborative workshop in the village of Phnonkham to investigate the impact of intermittent periods of drought and flooding. Intervening in the physical space of the village, the artist selected visual iconography familiar to the rural community, and used strategies of sharing and dialogue to increase awareness of environmental change. This work was envisioned as an act of mediation, whereby the artist collaborated with workshop participants to assemble large-scale fish skeletons on the dried-up riverbanks of the village

Sutthirat Supaparinya (Thailand)
The Ping River is a historical route for teakwood export, Siamese-European trade and also an important part of my family’s history. My grandparents lived along the Ping River. It was their hometown, their work and their life. My maternal grandfather was chief manager for the timber transport that moved teakwood from Chiang Mai to Bangkok.  His life was mysterious to us, since  it took him more than 3 months to complete his job. It was dangerous work as he had to handle elephants and heavy logs, keep an eye out for bandits and navigate between crags and cliffs. I followed my grandfather’s route, but only upstream from the Bhumibol Dam in the Tak, Lamphun and Chiang Mai provinces. The riverscape of his time and mine are completely different having changed after the Bhumibol Dam was built in 1958, the river was blocked and the expansion of the road network was developed further… Journeys along the Ping River as well as a boat  trip helped me to understand what my grandfather experienced in the past; at the same time I could observe other issues that have arisen in my time.

Anida Yoeu Ali (Cambodia)
presented by Java Arts Gallery
Anida Yoeu Ali (b.1974, Battambang) is an artist whose works span performance, installation, video, poetry, public encounters, and political agitation. She is a first generation Muslim Khmer woman born in Cambodia and raised in Chicago.
The Buddhist Bug is the concept of artist Anida Yoeu Ali, and a project of Studio Revolt.  In the artist statement she explains: “The Buddhist Bug Project seeks to map a new spiritual and social landscape through its surreal existence amongst ordinary people and everyday environments. The Buddhist Bug is a fantastic saffron-colored creature that can span the length of a 30-metre bridge or coil into a small orange ball. Rooted in an autobiographical exploration of identity, the Bug comes from the artist’s own spiritual turmoil between Islam and Buddhism. Set amongst everyday people in ordinary moments, the Bug provokes obvious questions of belonging and displacement.”