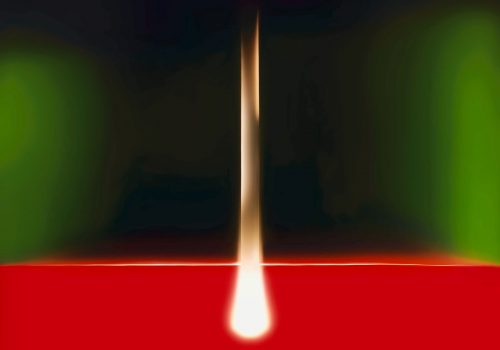 Photography’s capacity to record light has captivated the world since the medium began to take shape in the early 19th century. Aside from its acceptance and spread as a mass medium, its first visual iterations, as a product of sci- ence and art, established asignature aesthetic that fascinated future artists with the expressive and transcendent potentials of the medium. Garry Fabian Miller, one of the most notable figures at the forefront of non-figurative contemporary photography, records light directly onto photo-sensitive paper to create vivid, chromatic atmospheres that seem to emanate inward light without the use of a camera. His pictures explore the artist’s relationship to the landscape, as he connects with the optics of the world’s natural phenomena. Garry Fabian Miller’s experience of being in the environment and creating work from it, captures the essence of light and organic shapes, creating studies in visual harmony that originate in nature. Fabian Miller’s photographs communicate feelings and the idea of contemplation through the balancing of light and form.

“Samuel F.B. Morse observed that a photograph could not be called a copy, but was a portion of nature itself. That notion, which persisted throughout the nineteenth century, found new life in late twentieth-century language theory, in which the photograph was characterised as an imprint or transfer of the real, like a fingerprint.” – Marry Warner Marien

Since the mid-1980s, British artist Garry Fabian Miller uses his home of Dartmoor as inspiration, an ancient moorland in southern Devon, famous for being the birthplace of many myths and legends of English folklore. His photographic process, rooted in the early days of the medium, is a visual response to the artist’s interaction with nature. Through daily meditative walks into the landscape, Fabian Miller is inspired by nature’s lingering visual impressions, using this as a reference to create calculated exposures, lasting from thirty seconds to twenty hours, charged with painterly craftsmanship. Not unlike Van Gogh’s swirling light energy of the night sky, Fabian Miller effectively paints with light, mapping out its direction through cut-paper shapes and sketching studies created for the effect of desired shapes and forms before exposure. In Fabian Miller’s aesthetic, the use of geometric shapes like the circle and the square symbolize the symbiotic duality of the human mind and the natural environment; the circle represents nature while the square represents thought.

For decades, Fabian Miller’s evolution as a photographer has been a beautiful, comprehensive path towards abstraction, similar toMondrian’s minimalism in painting. The work undergoes a long, sublime transition from landscape to camera-less photography that uses the century old exposure methods of photography from its earliest days. In effect, Fabian Miller recalls the sentiment of wonder and fascination of early photography, creating work that strongly reacts to energy as well as to its viewer. His work is equivalent to painting with light.

“As I walked myself into the landscape, it became an experience of the sky space, the changing weather systems, the deep-thinking space, and that is how I think the work evolved from a kind of narrative, figurative based practice around trees and plants and nature into an abstract sky, light space.”

Within a historical context, Garry Fabian Miller’s work has a direct connection with concepts familiar to early modern English history, that of the complex interaction between magical, religious, and scientific belief. Although the work contains an array of minimalist forms, hues, and shapes, it is inherent to the past; to a preindustrial society intrinsically connected to agriculture and the cosmos, to the land and the changing patterns of nature. Garry Fabian Miller produces a visual testament to that which escapes simple explanation; to the experiences of meditation, spirituality, and enlightenment.