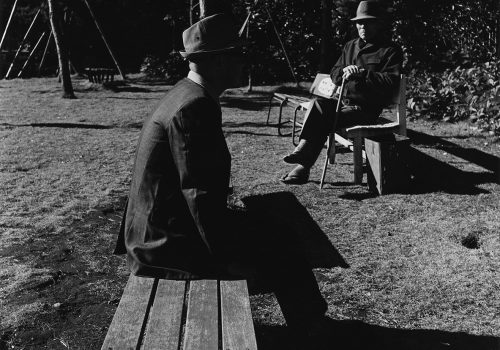 Miyako Yoshinaga presents The Legacy of ISSEI SUDA (1940-2019): Human Memory, the first posthumous exhibition in the United States of renowned Japanese photographer Issei Suda who passed away in early 2019. This is the gallery’s second exhibition of the artist, following the 2014 exhibition “Life in Flower: 1971-1979.”

Issei Suda (b. 1940 – d. 2019) began his long and celebrated career in 1967 as a stage photographer of avant- garde Japanese theatre. His travels through Japan during the early 1970s inspired much of his work at the time and concentrated on street scenes. He discovered the random beauty of textures and patterns in nature, and of ordinary people in their everyday habitat. Throughout his career, Suda demonstrated an innate ability to show people as latent participants existing in the highly charged space between the ordinary and the extraordinary.

This exhibition, in tribute to Suda’s legacy, features approximately 25 monochrome prints selected from his 1996 monograph entitled Human Memory which won the Ken Domon Award. In the postscript of the book, Suda describes his snapshots of strangers and everyday scenes as a strong reminder of himself, identifying within the gaze of his subjects a very personal connection. He also believes a photographic image, even its fragment, reflects on the human emotions that are woven into everything around us – people, materials, nature, and therefore can reinvigorate a ghost-like ambiguous memory, often disorienting time and place.

The works in the exhibition were taken from the late 1970s to the early 1990s in various Japanese towns and cities. The scenery is often drab and austere. The vulnerability and naivety the viewer might feel perhaps stem from the rapid economic and cultural changes in Japan at the time.

Suda typically pares his capture down and eliminates anything unnecessary from his square frame so that the viewer is drawn to ruminate on the mysterious essence of the subject. The extraordinary aspects of the everyday reveal themselves through Suda’s unique worldview. He is able to capture a reality not often seen by the naked eye, that is created during the moment of capture by the photographer without “thinking.”