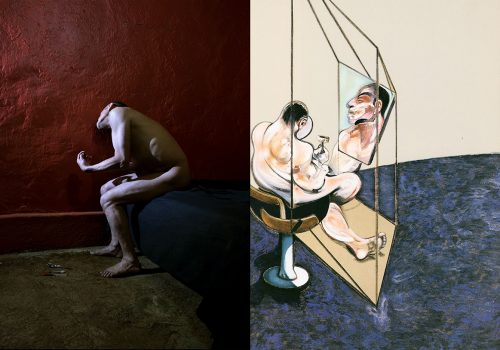 The two books, bound together, can be consulted side by side, allowing one to create a vis à vis between the works of the two artists.

The texts are presented on autonomous notebooks allowing the reader to read the text while browsing through the visual narrative.

“Bacon [d’Agata] does not say “pity for the beasts” but rather every man who suffers is meat. Meat is the common zone of man and beast, their zone of indistinguishability, it is that “fact”, that very state in which the painter identifies himself with the objects of his horror or compassion”. Gilles Deleuze

Antoine d’Agata is a photographer who lives on the edge. He immerses himself in his personal universes, until he exhausts them. He transforms reality with the help of time, and shows us facts, events, mixed textures or diffuse colors that shape human forms that get lost. In some of Francis Bacon’s works, we can see these photographs of d’Agata, the same worlds full of chiaroscuro, continuous ups and downs towards hell, and this attempt to lengthen the moment of joy or solitude.

Does the deformation of the bodies, caused by the trembling of the images, go as far as their familiar dehumanization by the painter?

Antoine d’Agata would probably not refuse to affirm this. Isn’t it precisely the animality that he insistently claims from the sexual relations he photographs. Gilles Deleuze, a philosopher, is said to have spoken of his “becoming an animal”, a becoming a dog, to be precise. An integral part of his work of art, man and work struggle to exist. A chromatic struggle that is not without recalling the colors of Francis Bacon, whose deformed flesh is also found, as if torn apart and evaporated.

After a book devoted to the correspondence between the portraits of photographers Nan Goldin and Julia Margaret Cameron and historian and collector Marwan T. Assaf, in this second volume, The Eyes Publishing proposes an encounter between the works of Antoine d’Agata and Francis Bacon with the complicity of the author Perrine Le Querrec.

The painter Francis Bacon (1909 – 1992) is one of the most famous British artists of the 20th century. Far from the abstraction that dominated the 1950s, Francis Bacon’s painting, deeply nourished by the artist’s depressive temperament, seems to be a reflection of his anxieties and dramas.

Particularly interested in the theme of existence, which he perceives as painful, the artist reveals his genius in the realization of triptychs, notably Three Studies by Lucian Freud, which he completed in 1969. Bacon is the author of an expressionist work strongly influenced by the rereading of the great masters of the past.

Antoine d’Agata, born in 1961, is a French photographer and filmmaker. His work, mainly focused on the themes of the body, wandering, marginality and prostitution, wants to question the viewer on his own perception of reality.

Represented on numerous occasions in solo and group exhibitions, d’Agata was awarded the Niépce prize in 2001. Since 2004, he has been a member of the Magnum Photos agency.

“The first painter’s exhibition that I visited was a retrospective of Bacon at MoMA in 1989. It was a shock from which I still haven’t recovered.” Antoine d’Agata