Best Of 2018 – The Experimental Self: Edvard Munch’s Photography 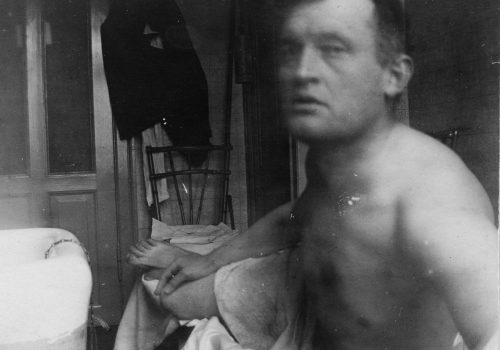 An exhibition of photographs, prints, and film by the master painter and printmaker, on view at Scandinavia House in New York through March 5, 2018, provides a new perspective into his experimentalism.

Norwegian artist Edvard Munch (1863–1944) also took photographs. This exhibition of images, prints, and films by painter emphasizes his experimentalism, examining his exploration of the camera as an expressive medium. By probing and exploiting the dynamics of “faulty” practice, such as distortion, blurred motion, eccentric camera angles, and other photographic “mistakes,” Munch photographed his immediate environment in ways that rendered them poetic. In both still images and in his few forays with a hand-held moving-picture camera, Munch not only archived images, but invented them. Edvard Munch seems also to have been one of the first artists in history to take “selfies.” Like his paintings, prints, and writings, the most consistent theme in Munch’s photography was self-portraiture. In his self-images, produced in a variety of media, Munch assumed a range of intimate, as well as performative, personae.

On loan from the Munch Museum in Oslo, Norway, the 46 copy prints in The Experimental Self: Edvard Munch’s Photography and the continuous screening of the DVD containing Munch’s films are accompanied by a small selection of prints from private collections, as well as contextualizing panels and others that examine Munch’s photographic exploration. Similar to the ways in which the artist invented techniques and approaches to painting and graphic art, Munch’s informal photography both honored the material before his lens and transmuted it into uncommon motifs.

Munch’s photographs have been dated to two periods, 1902 to 1910 and 1927 to the mid-1930s. He took up photography in 1902, the year in which he and his lover Tulla Larsen ended a multi-year relationship, following a confrontation with a pistol shot that mutilated one of the artist’s fingers. This event, and an accelerated career, triggered a period of increasing emotional turmoil that culminated in a rest cure in the private Copenhagen clinic of Dr. Daniel Jacobson from 1908 to 1909. The second period of activity, from 1927 into the mid-1930s, was bracketed by triumphant retrospective exhibitions in Berlin and Oslo and by a hemorrhage in Munch’s right eye, which temporarily impaired his vision. This was also the time that Munch tried his hand at home movies.

Exploring the dynamics of layered imagery, undefined form, and shadows that replace living bodies, Munch pursued photography as an experimental medium and himself as an experimental subject. “I have an old camera with which I have taken countless pictures of myself, often with amazing results,” Edvard Munch stated in 1930. “Some day when I am old, and I have nothing better to do than write my autobiography, all my self-portraits will see the light of day again.” Such challenges to the camera’s capacity—to record an aspect of reality—were replicated by Munch in other media. He did not exhibit his photographs.