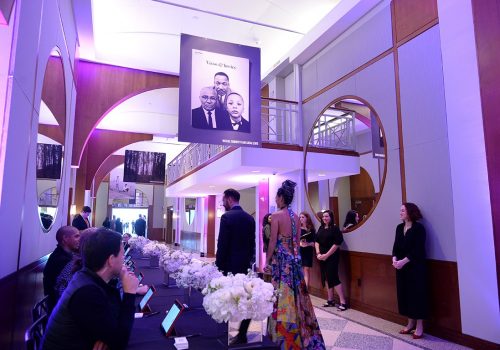 An annual event organized by the International Center of Photography (ICP), the Infinity Awards honor exceptional achievements of emerging and established photographers, and recognize innovation in visual arts. A diverse jury of photography practitioners and experts takes part in the selection. While the event itself is noteworthy, its preparation and its unfolding equally deserve attention.

There are hundreds of photography awards every year: some local, others global; some offering enormous grants, others only modest prizes. The results are announced; they are picked up by the press; and soon the winners are forgotten. An award ceremony is both intriguing and fascinating. It is as much a social event, as it is an artistic, even political, one. Its deployment involves the working of a well-oiled machine. The one powering the ICP is premised on a quasi-collegial principle.

The exhibitions department starts out by compiling a list of international photography experts. Those include “photographers, curators, critics, scholars, publishers, etc.,” enumerates Erin Barnett, Director of Exhibitions and Collections at ICP. Everyone on the committee “nominates people and works for six categories … decided by ICP staff.” The winners are then selected by three international judges, including one from ICP, a few weeks before the awards ceremony. The winners do not receive any monetary grants: the awards are purely honorary.

This year, there are six categories (see below). To be eligible, the candidate must submit a project created within the past year; “[t]he only exception is the emerging photographer award, which is given to a photographer whose work has been discovered in the past five years or deserves to be.” This year, the judges have recognized the political statement made by a special issue of Aperture magazine devoted to Vision & Justice (Critical Writing and Research Award), and the investigation into secret detention practices in the war on terror carried out by the researcher Edmund Clark and the photographer Crofton Black (Documentary and Photojournalism Award).

The Online Platform and New Media Award went to the artist-run Super PAC For Freedoms for their citizenship and political engagement. The co-founder of the movement, Eric Gottesman is pleased to see the value of a citizen movement being acknowledged. “Receiving an award from an institution which had recognized so many photographers I admire… is such an honor. We’re all very pleased! And it’s only the beginning of our project. It gives us great confidence that we’re on the right path.”

Conceived as a citizen-run project, “a vehicle, an open-source movement,” For Freedoms is characterized as a platform for dialog and political reflection where “many voices speak” and “many different projects grow.” The movement has become essential in the artistic and political landscape thanks to its actions (buying advertising space in order to display politicized messages) as much as by engaging in a democratic dialog through exhibitions and debates.

Since the presidential transition in the US, major museums, civic associations, and individual initiatives have sought new outlets for politicized artistic gestures. The movement For Freedoms, founded last year, seeks to mobilize the key players, build a network, and bring people together.

The awards presented to For Freedoms and to Edmund Clark & Crofton Black, Aperture, as well as to Michael Christopher Brown, attest to the desire to honor artistic engagement with social and political problems. In the words of Erin Barnett, “the winners of this year’s Infinity Awards may be more overtly political than in past years, but [they were selected because their work was thought to be] the most innovative way to engage artists and audiences in a variety of new platforms.”

An award may, nevertheless, be a vehicle for individual promotion. The French photographer Vasantha Yogananthan, winner in the Emerging Photographer category, is a case in point. The elaboration of his project A Myth of Two Souls, comprising twelve photo books, has left a trail of grants and awards. “They have helped me finance a project I would have been unable to carry out otherwise.” At the same time, the recognition received helped him reach “a new audience—both the general and professional public alike.” Co-founder (with Cécile Poimboeuf-Koizumi) of the publishing house Chose Commune, Vasantha Yogananthan is preparing the publication of the second and third parts of his ongoing project, entitled, respectively, Promise and Exile. In August, he will return to India to capture images for future chapters. While the ICP award may be honorary, it guarantees his project will receive peer recognition and, more broadly, brings to wider audiences.

Arthur Dayras is an author specializing in photography who lives and works in New York, in the United States.