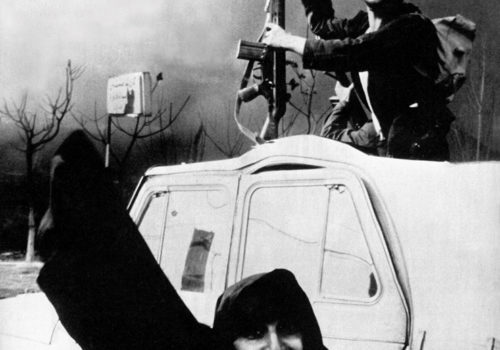 His name is Sylvain Julienne. He wanted to share a few memories with the readers of The Eye of Photography.

Standing on the steps of a temple in Pashupatinath and seeing the people crossing the bridge or the banks of the Bagmati River appeases me. The monkeys deflea each other and mate loudly, the kids dive, the good-natured priests cremate non stop and elegant women of all ages, in sari, wander. A group of sâdhus share a big joint while another trains to lift a weight hanging on his testicles. Tourists love it, you have to work hard.

I started in New York with a story about a march against the war in Viet Nam. A big black cop grabbed me and shook me to make his colleagues believe that I was struggling and so justify a beating and then abandoned me saying: French ?. In the end, three of my photos of this march appeared signed on the cover of the Village Voice, the local weekly.

After being thrown out from several high schools and colleges, I missed my baccalaureate and was reformed by the army for refusing to practice shooting with a definite “unadaptable to the military community”. I think this umpteenth dismissal that provoked the atheism of my parents … I’m kidding.

That’s why when I returned to the Albert Hotel near Washington Square, where I lived with friends, I took a rather modest look at my three works visible in all the newsstands. Then the Village Voice asked me for photos of an occupied site in Harlem. I did the pictures when a group jumped on me with baseball bats and barbecue spades. The driving buddy managed to lose the two motorbikes that were chasing us in Central Park. The photos did not please because they showed a furious group armed with various utensils throwing themselves on the photographer … “these are only peaceful citizens who just want to prevent the construction of an administrative building … even if the ‘We are in Harlem …’ explained the editor … in his comfortable office. I borrowed a friend’s van and asked Vaucher, a rally driver, to drive. We got the rear windows dirty leaving just a clean round for my goal. Harlem … click clac … pursuit again and there I learned something: when you arrive at 100 km an hour with a van facing a right-angle turn … a turn that you would take 30 with a car, you have to put the vehicle sideways before the bend and then double-decluch during the skid and continue for the next two. Yes it’s not very easy … I tried years later with my father’s DS one night or I was bored and had a little drink .. it was necessary to rebuild the whole right side.

The first photo was publishable and the next ones looked like the previous ones … mad guys who were throwing themselves on the photographer. Thanks to Vaucher who did not stall and the friend who did not charge me the baseball bumps on his van.

A friend, Jack Burlot (it’s really Jack … he cares about it…) gave me the address of Göksin Sipahioglu in Paris for my return to France. I loved New York. If on arrival I slept in the Park and against a ticket machine at Grand Central Station, woken every two hours by the cops, the opportunities to work were many and I quickly found a job. New Yorkers come from all over the world, it is a cosmopolitan city, and you will always find people with the same interests as you. You study sexual intercourse of oysters in the seventeenth century? … no problem you will find a dozen people who worked on this topic for years …

Göksin was the Paris correspondent of the Turkish newspaper Hürriyet rue de Marignan near the Champs he financed me immediately to cover the troubles in Northern Ireland. I found it unpleasant to drive on the left but I had a Morris Cooper and that … I liked.

For more than a month in Belfast I photographed protests, wounds, deaths and started to get interested in the IRA – Irish Republican Army. Protestants regarded members of this secret army as mere terrorists. They were very active in this hidden civil war … I decided to report on them. Not easy. One night I had to run away from a pub by the window of the office of the director pursued by a dozen customers while I was looking “discreetly” for information … so I went south and contacted the Sinn Fein in Dublin – the political branch – to state my request … they told me they had no contact but that … it would be the IRA that would contact me. A dozen days later a scrawny one gave me a piece of paper with an address, a date and an hour. The next day two hundred miles south of Ireland I was at the appointed time at the meeting point by the sea. Nobody. The next day another appointment to the south. They were three and handed me a packet wrapped in newspaper 30 cm long and 10 cm in diameter. Gelignite they told me … not to let it fall or receive the least shock … I had to bring it back to Belfast. Hidden under my seat, I regretted having to drive a rattletrap car … and I had to cross the very protected Northern Ireland border… to hand over the package .

A few days later I was photographing an IRA training camp near Belfast and at the end of the week my pictures were on the front page of English newspapers … the cover of Time magazine … etc.

During the decades that followed my photos of the IRA I wandered around. Not enough in Africa and not in Russia at all … believe me I regret it. For five years I covered the Cambodian war with the fall of Phnom Penh, the carnation revolution in Portugal, Lebanon, the return of Khomeini in Iran, ETA liberation movements, the Burmese Karens, the coup d’état in Chile in September 1973 … etc … etc.

This way of making a living suited me perfectly because in the end, what makes me happy is to live situations of random encounters. Yet the photo equipment is bulky while to write a pen is enough. I spent years walking in India. When at downs I meet a little official  on the ghats of Benares  who tells me his life I am happy and I have something to write. It’s exciting. I am invited to dine in a village of lepers … and stay a few days so the welcome is warm … people flee from them and they suffer … and this endlessly. Thousands of stories without photos … but words and situations. I discovered late that with phoyography I would have liked to learn to write. Write and draw…

I would like to tell you of the night in the pit of a garage with three Cambodian NCOs while we were tightly encircled by the Khmer Rouge and that every minute we feared to see them enter … just before the oldest had given me a grenade telling me that it would be better than getting caught … another time in a hole on the front line for two days we finally had a helmet full of rice and some “stuff” on it to eat. To the look of my companions I suspected it was snake, lizard or something. The problem is that I did not understand what it was by eating it … human liver. Eating the liver of an enemy that had been killed prevents him from coming back to haunt you.

I would like to tell of a family lunch in Tehran under the aegis of Hafez as mystical as sensual or describe the effect of psilocybin on fish in Bali. Why fish? … because they go berserk, have a rather delusional behaviour whereas I knew them calm rather serene. As for me if I shared these mushrooms with them I would keep a standard behaviour. It is true that I talked a lot with an eagle flying above me but it was he who spoke to me first.

Of course all these years of meetings and discoveries are in line with what I had decided much younger: live first and later: earn money.

Photography has always been like a flying carpet. It leads me where I want and opens my eyes to the wonders of everyday life. Of course, my most beautiful pictures are the ones I did not dare take. Slowly I learned to see, then I liked to see and now even if I no longer have a camera I have an eye: the eye of photography.