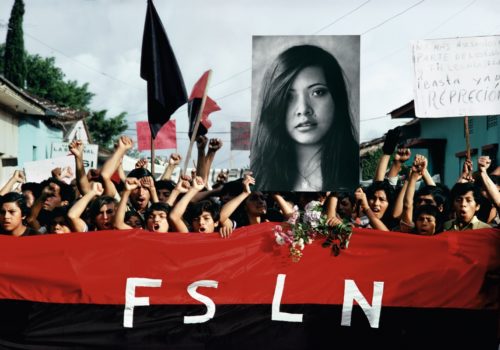 In 1979, the Sandinista National Liberation Front (FSLN) fought to victory against the brutal dictatorship of Anastasio Samoza in Nicaragua. One of few photo journalists from the US to cover the revolution, Susan Meiselas was there during the last years of the conflict (1978-79). Meiselas’ photographs capture the Sandinista’s and the Nicaraguan people’s struggle for freedom – depicting battle, lost lives, collateral damage, and ultimately victory – as they overcame the military might and power of the Somoza regime. In late 2016, this famous work was published in a new book edition with multimedia tools, and is now on view at Stephen Daiter Gallery in Chicago. On this occasion, The Eye of Photography would like to share a few important quotes of witnesses of that conflict.

“Dear Parents: I’m sure you’ve noticed my odd behavior over the past months. I no longer go to parties. I appear and disappear. This is because I’ve become a revolutionary, a member of the FSLN. I’ve done this for the following reasons: For twenty years, I have lived as I pleased and spent wildly while thousands of children, the sons of peasants and workers, suffered hunger, and died of malnutrition or in need of medical care. Our country is full of misery and backwardness. All Nicaraguans have the sacred mission to fight for the freedom of our people. Our generation is doing what past generations should have done. Injustice and crime reign in the enslaved Nicaragua you have left us. We do not want our children to accuse us of the same thing. The stench of the Somoza regime has become unbearable to the young. If our parents learned to live with this rotten government, we are prepared to risk our lives to put an end to it. I am going to the mountains, where the patriots, the honest human beings, those who are willing to sacrifice everything for their people, can be found.” – Excerpt from a letter written by Edgard Lang Sacasa to his parents. His father, Federico Lang, was a wealthy Nicaraguan businessman and supporter of Somoza. Edgard was killed by the National Guard on April 16, 1979.

“History doesn’t come to an end with the ringing of the bells by the grave, or with the rumbling of tanks against a peaceful city. History begins when it is firmly established that an ideal lives in a people, though men die…” –Pedro Joaquin Chamorro, editor of the opposition newspaper La Prensa. Assassinated January 10, 1978.

“At nightfall, when the Guard stopped fighting, we rested, checked our guns, ammunition, and boots. You lit up a cigarette and smoked it lying down, the tip to the ground. Otherwise, you could get shot smack in the face. On watch, alone with your gun behind the barricade, you get to thinking a whole lot of things. You remember your family, the good times, and think about what it’ll be like when Somoza and the Guard are gone, when there are no more bullets, when there’s nothing but progress. Suddenly, you hear the whistle of a bullet. You get up, look around, and see a friend alongside. He’s asleep and you have to watch over him. Then someone brings you a cup of coffee. And another cigarette.” –Fernando