Stockholm : Up Close by Martin Schoeller at Fotografiska 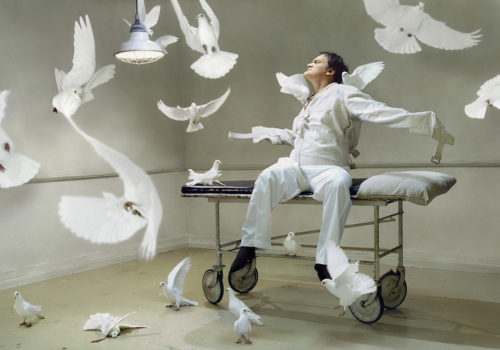 Fotografiska’s exhibition Up Close will be the first time Martin Schoeller’s four photographic series have been exhibited at one venue. “The exhibition at Fotografiska is my most comprehensive to date. It is absolutely wonderful to see all the works together,” Martin Schoeller explains enthusiastically. Both the artist and his works are characterised by enthusiasm and warmth and it is evidently clear that the photo sessions have been conducted in both an inspiring, playful and at the same time in an extremely technical professional way.

This comes across in the images of the many celebrities that have posed in front of Schoeller’s camera such as when Jay Z relaxes during a diner, Quentin Tarantino attempts to break loose from his straight jacket surrounded by the ultimate symbol of peace – white doves, or when Marina Abramovic hangs around with good-looking naked people on the subway. They all share themselves with Martin, and via his gaze he shares them with us. As an emergent photographer Schoeller managed, through life’s twists and turns, to secure a position as assistant to Annie Leibovitz, whose constantly innovative style perfectly suited the young creative artist, who was brought up in Munich. Since then his creativity has continued to expand in all directions.

Soon, he was sought after by the world’s major magazines and newspapers, and in addition to portrait commissions he has pursued his own projects, which he is just as strongly dedicated to. The best known of these is perhaps Close Up – a series in which he asks those he portrays to pose for an intimate picture taken in a specific way that focuses on certain facial characteristics. “I use the flash and lighting in order to highlight the eyes and mouth. I think that these two features of the face best show each individual’s uniqueness, while at the same demonstrating how similar we are, all of us,” Martin says. It is a clearly democratic endeavour where photography in a smart and efficient manner helps open both the viewer’s eyes and heart: What really differentiates Hilary Clinton from Denise Martin who lives on the street? What is it that makes their respective expressions unique – and what do they have in common?

Martin Schoeller’s photographic work also comprises a series featuring female bodybuilders, a group that is rarely portrayed outside of the specialised fitness press. Schoeller explains why he fell for this particular group. “Few others care about the outcome of these women’s struggle to obtain, in their eyes, the best body. But they are so dedicated to the task they have set themselves that the response from others is not really important, only the response from their own group. For me the commitment that these people display for what they have chosen to pursue is deeply fascinating, regardless of what the majority might think.” Martin finds such an attitude very attractive and a meta-communication about what you choose to show and what you choose to hide can also be discerned in many of his other works. Sometimes there is a dialogue between the image we are accustomed to seeing of the sitter and the unique encounter of the moment. An example is when he has George Clooney hide his eyes behind a crumpled image of himself. Is this how George hides behind his persona? What is he trying to say to us? This question could be asked of many of the portraits in the exhibitions, “How is it – really?” You may find the answer in the exhibition and perhaps you will also discover something new about yourself…