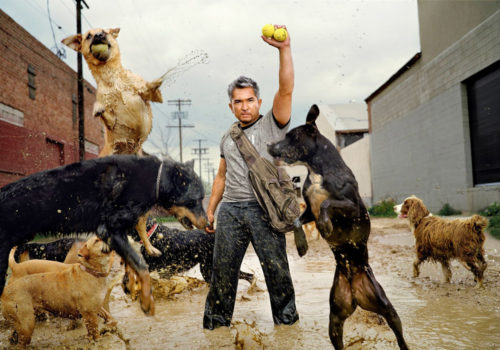 To coincide with the release of a major monograph published by TeNeues, German photographer Martin Schoeller is holding an equally important exhibition at the Hasted Kraeutler Gallery in New York. An internationally renowned portrait photographer whose work has appeared in Time, The New Yorker and GQ, Schoeller rose to prominence in the early 2000s with his uniform style: tightly framed faces, bright lights and retouching that emphasizes the facial features to an almost supernatural extent.

Big names from the worlds of cinema and politics have sat for Schoeller in the past 15 years: : Barack Obama, Jack Nicholson, Cate Blanchett, Angelina Jolie, Brad Pitt, Angela Merkel, Mark Zuckerberg, Iggy Pop and Lance Armstrong, to name but a few. The portraits are fun, impertinent, cartoonish, coarse but never vulgar, which is a fair description of modern magazine and advertising imagery, especially in the fashion industry. A worthy successor to Richard Avedon and Annie Leibovitz, for whom he worked as an assistant (although, admittedly, Leibovitz was more inventive in her early work), Schoeller chose the artist Jeff Koons to write the introduction to his monograph.

While his style has been criticized for its commercial tone, his portraits often capture a “moment of honesty” from his subjects, who are invited to let down their guards. What the star seems to have forgotten is that beauty in a photograph often lies in its imperfection, spontaneity, uncontrolled oddity, and a dose of sensitivity to things other than fame. It was this indispensable balance to the artistic spirit which his idol, Irving Penn, strove to find in his various photography projects and through a style more natural and humane than the ones favored by his followers. Without wholly condemning the work of Martin Schoeller, we might cast doubt on its lasting power. As Schoeller himself has said, “The pictures that survive over the years are ones where you see something of somebody that they normally wouldn’t share so easily.”