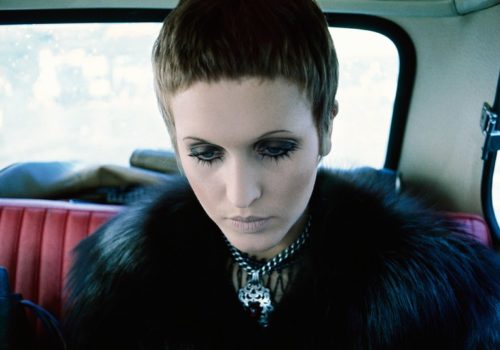 I started photography a long time before I became a photographer.
In 1957 I went to Worthing Art School to be a painter.
This was my dream, but in 1959 I sa w an American Art Directors Annual in the college library.
That made me want to be a graphic designer instead.
So I changed to Brighton Art School. It was there that I met Dermot Goulding.
He taught photography one afternoon a week and he changed everything for me.
He showed that photos could be as exciting as music. His pictures were full of poetry and feeling.
He also showed me what was happening at the Royal College of Art in London.
All sorts of wonderful graphics and imagery that are still my biggest influence.
He would send us out into the street to take pictures. We knew nothing about technique, but who cared?
We used some cheap movie stock that we cut up and loaded into the 35mm metal cartridges
the photography students threw a way.
This film was contrasty and grainy, and when printed on that great Agfa 4 paper
the images became punchy and wonderful.
This picture of my girlfriend Diane was taken on a little Samoca 35mm camera, which I still have.
It was given to me by my parents as a 21st birthday present. They also gave me a Hofner Senator guitar.

When I left art school I joined a band.
I just decided that’s what I would rather do.
And on quiet Sundays I used to go for walks around Bromley where I was living.
I like empty suburban streets. No one around, beautiful gates and quiet gardens.
A peaceful strange place. And I started to take photos.
The first one I made is the grey gate on the opposite page.
I liked that picture so much I decided to carry on – just simple pictures of quiet empty places.
When I eventually became a fashion photographer and later moved to Paris, Zoom magazine published some of them.
Herb Wise, a music publisher in New York, saw the story and asked me to make a little book.
It was called Pleasure Places.
Photos like these often became the settings for my fashion pictures.
Especially in those early days in Paris.

The band I was in decided to call it a day and after that all I knew for certain was that I just didn’t want a 9 to 5 job.
One day I was walking down Frith Street in Soho when I saw a friend of mine from the Royal College of Art.
When I told him what had happened he simply said, ‘Why don’t you try fashion photography?’
I had just that morning been thinking about maybe trying that. So his words just clinched it.
Zandra Rhodes was a good friend of mine from my Royal College of Art days. One afternoon I went to her flat for tea.
I was amazed to see everything in her flat was from Woolworths, used and adapted in a fantastic way. I went to Woolworths
with two friends of mine. Sandy, who was a model, and Jacky Bowstead, who was also a student from the Royal College .
We would choose all the clothes they had in the store and do some ‘Woolworths fashion pictures’ at Zandra’s flat.
We soon found out that the only clothes they had were schoolgirls’ underwear. And roller skates – so that’s what we took.
These pictures are some of the images we came up with that afternoon.
When I got that roll of film back I decided to take them to Nova magazine – maybe I could get some work.
There was only an assistant in the art department, so I left them on the light box along with my name and phone number.
One day my phone rang. It was Brigid Keenan, the beauty editor from Nova. She liked the pictures.
She wanted to use one and asked me to shoot another fashion story in a studio, to compliment the Zandra Rhodes story.
Knowing absolutely nothing about studios I called Peter Webb, whom I had met when he photographed the band.
He had become a good friend and was a great studio photographer. Could I use his place?
I shot my first studio fashion story in his studio. He showed me how to do everything .
I then met Leon Doffman who became my agent, best friend and, with Dermot Goulding, my biggest influence.
It was him who told me I should go to Paris.