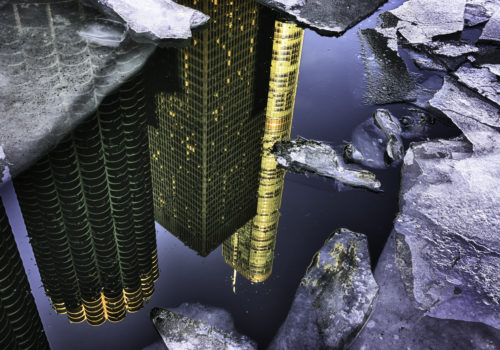 Deep in the winter, after the water has lost its summer heat, the river that flows through the center of Chicago freezes. Not the whole river, just the top layer which becomes decorated with broken ice. This cold finger pokes into the heart of the city from Lake Michigan. Sunlight and city lights are reflected from the ice and, when it’s newly washed and wet, the frozen water also reflects the cityscape. Skyscrapers are transformed into two-dimensional geometric forms with occasional splashes of glowing reds and greens and yellows captured within the blue-tinted ice floe. Its magical.

Each year I look forward to this transformation of the Chicago River. It does not freeze often, and when it does, it does not remain frozen for long. Usually just a few days before the water warms by one or two degrees and the ice melts. While it lasts, the floating ice is always in motion, and the compositions formed by its broken sheets and irregular polygons are forever changing. The appearance of the textured surface also changes with the light as clouds come and go and, as the day progresses, the color palette varies from fiery-heat to frigid-cold. I could spend the whole day photographing the varying colors and abstract forms of the frozen river. In fact, I have spent much of several winter days doing just that, giving up only when the cold has penetrated too far into flesh and bone.

I began the project River Ice in January 2017. Since then I have revisited the frozen river several times over two additional seasons. Each year the ice-cover, its appearance and its extent, has been different. To observe and communicate just how varied the spectacle can be has therefore required more than dawn until dusk photography in a single day, or even for several days in a single year. It has required a multi-year project. The resulting series of images is, for me, a celebration of the phenomenology of winter. It’s a celebration of the natural world reaching into the center of the human world, and of things that are novel because they are ever changing and brief.