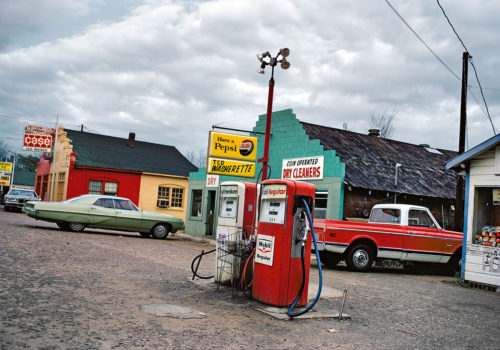 The publication of William Eggleston‘s Chromes by Steidl in 2011 marked the beginning of the examination of the entire prolific output of this extraordinary artist in a range of books including Los Alamos Revisited (2012) and the ten-volume The Democratic Forest (2015). The three volumes of The Outlands are drawn from the same source, the photographs Eggleston made on color transparency film from 1969 to 1974 that formed the basis for the Chromes volumes and for John Szarkowski’s seminal exhibition of Eggleston’s work at the Museum of Modern Art in New York in 1976 with the accompanying book William Eggleston’s Guide. However, with the exception of a couple of alternate versions, none of the photographs in The Outlands has been published previously.

The result is revelatory. Starting at almost the exact point on the same street in suburban Memphis where Eggleston famously photographed the tricycle, the work follows a route through the back roads to old Mississippi where he was raised. What is disclosed is a sublime use of pure color hovering in semi-detachment from the forms he records. At the time, Eggleston was photographing a world that was already vanishing. Today, this final installment of his color work offers a view of a great American artist discovering the range of his visual language and an unforgettable document of the Deep South in transition.

Born in Memphis in 1939, William Eggleston is regarded as one of the greatest photographers of his generation and a major American artist who has fundamentally changed how the urban landscape is viewed. He obtained his first camera in 1957 and was later profoundly influenced by Henri Cartier-Bresson’s The Decisive Moment. Eggleston introduced dye-transfer printing, a previously commercial photographic process, into the making of artists’ prints. His exhibition “Photographs by William Eggleston” at the Museum of Modern Art in New York in 1976 was a milestone. He was also involved in the development of video technology in the seventies. Eggleston is represented in museums worldwide, and in 2008 a retrospective of his work was held at the Whitney Museum of American Art in New York and at Haus der Kunst in Munich in 2009. Eggleston’s books published by Steidl include Chromes (2011), Los Alamos Revisited (2012), The Democratic Forest (2015), Election Eve (2017), Morals of Vision (2019), Flowers (2019) and Polaroid SX-70 (2019).