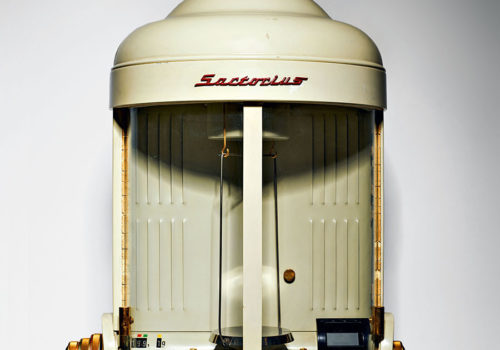 A tripartite photo-portrait of a leading German tech company.

Science and technology have always played a crucial role in advancing medical treatment. It is precisely their interaction that is especially important for Sartorius, a leading international partner of life science research and the biopharmaceutical industry. This is the bedrock of the Sartorius mission to “empower scientists and engineers to simplify and accelerate progress in life science and bioprocessing, enabling the development of new and better therapies and more affordable medicine.” Yet how to share such a complex vision with the public in accessible terms? The answer lies in Process – People – Product, three photobooks and a text booklet that provide a dynamic portrait of the company, which opened its doors wide to further this project.

In “Process,” Timm Tautert takes us directly into Sartorius’ laboratories and production facilities, depicting what he calls an “architecture of process” and conveying the sense of wonder this mesmerizing world of the most advanced technology creates. “People” is Juergen Teller’s candid look at the creative personalities that drive the company, though his fascination goes far beyond any standard portrait: “I was keen to photograph everything: the building, the flowers, the donkey, life around the lunchtime ice-cream parlor, the high-tech machines.” Finally, Henry Leutwyler brings a selection of machines from Sartorius’ rich archive to life, from an imperial patent of 1890 to today’s cutting-edge bioreactors, filtration devices, and microbalances. The result is a multifaceted publication that not only recognizes a dynamically evolving organization, but also reminds us of the vital relationship between science and technology.

Henry Leutwyler was born in Switzerland in 1961. In 1985 Leutwyler moved to Paris, where he established himself as an editorial photographer; in 1995 he moved to New York City, where he lives and works today. His photos have been seen in the New York Times Magazine, National Geographic, Vanity Fair and The Wall Street Journal, among others. Leutwyler’s books with Steidl are Neverland Lost: A Portrait of Michael Jackson (2010), Ballet. Photographs of the New Your City Ballet (2012), Document (2016) and Hi there! (2019).

Born in 1941 in Tuchel, West Prussia, Timm Rautert studied photography with Otto Steinert at the Folkwang School of Design in Essen in the 1960s. Starting in the 1970s, he mainly concentrated on photojournalism and documentary work, and in 1993 was appointed professor of photography at the Academy of Visual Arts in Leipzig, where he taught until 2008. In the same year, he was the first photographer to receive the Lovis Corinth Prize. His books with Steidl include When We Don’t See You, You Don’t See Us Either (2007), No Photographing (2011), Josef Sudek, Prague 1967 (2016), Vintage (2017), Germans in Uniform (2018), Anfang/Beginnings (2019) and Bildanalytische Photographie / Image-Analytical Photography, 1968–1974 (2020).

Juergen Teller, born in Erlangen, Germany, in 1964, studied at the Bayerische Staatslehranstalt für Photographie in Munich. His work has been published in influential magazines such as Vogue, System, i-D, POP and Arena Homme+, and has been the subject of solo exhibitions including those at the Institute of Contemporary Arts in London, the Fondation Cartier pour l’art contemporain in Paris and Martin-Gropius-Bau in Berlin. Teller won the prestigious Citibank Photography Prize in 2003, and from 2014 to 2019 held a professorship at the Akademie der Bildenden Künste Nürnberg. His books with Steidl include Louis XV (2005), Marc Jacobs Advertising, 1998–2009 (2009), Siegerflieger (2015), The Master IV (2019) and Handbags (2019).