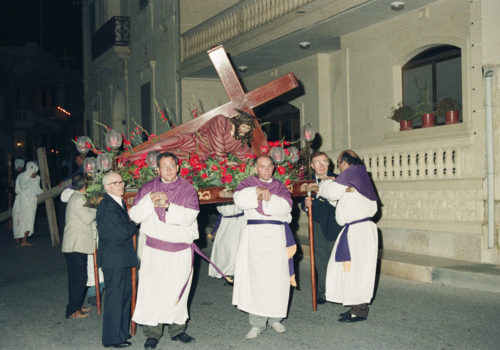 “The Malta story became a reflection of what was going on around me in the world. Working on the archive, creating a visual story became a meditative process. It helped me keep FAITH”. – Amelia Troubridge

In celebration of Amelia Troubridge’s 26-year photographic career, Spazju Kreattiv St James Cavalier, Malta’s National Centre for Creativity, will be exhibiting FAITH a retrospective of Troubridge’s life and work in the Maltese Islands and an exploration of how faith, in its many meanings has shaped its life, culture and identity.

It is the first solo show of Troubridge’s work in Valletta, signalling a return home for the artist who spent a lot of her youth on the Islands with her Maltese mother. The exhibition balances this intimacy with a greater sense of identity within Malta itself; the artist juxtaposing her own life with the changing landscape and spirit of the people. Working with photographs from 1993, Troubridge captures a journey of a country moving towards independence away from its colonial past and sensitively feels her way through the tensions of old cultural values with contemporary perspectives on identity.

Troubridge has been working on her photographic archive for the exhibition for the past two years: “By 2018, I felt profoundly affected by many events around me. They felt not real, like a narrative or distortion had become the normal…Sifting through the archive, I saw a giant jigsaw puzzle. Finding each piece became an act of finding something that had been lost.”

From the archive Troubridge has brought together a journey that taps into key socio -political moments in the Maltese Islands from 1993 to the present, documenting 90’s raves, the Marsa Migrant centre in 2008, and joining the European Union in 2004. The photographs also present political figures such as Dom Mintoff (a former-Prime Minister of Malta) and Sir Anthony Mamo (Malta’s first President).

The exhibition has been divided into three sections: ‘Religion and Politics’, ‘Home and Community’ and ‘Surrender’ but Troubridge’s photographs depict the overlapping of all these themes against the beautiful Maltese landscape. Images of religious and political processions go hand in hand and juxtaposed with intimate portraits from a first Holy Communion, a gathering of nuns laughing together and a religious statue above a pile of dirty dishes in a kitchen sink. Young boys lounging next to a memorial on the Maltese streets takes on greater significance next to the photograph of the EU street procession or a photograph of a group of older men gathering in the shade. Photographs of parties and social gatherings depict the young vibrant life of Malta whilst portraits of young women without faces hang up washing in the intense sunshine.

The three sections of the exhibition tell a different story of Malta; ‘Religion and Politics’ is about the development of a new nation after British colonialism, a country finding its own identity, freedom, values and direction. ‘Home and Community’ is about Troubridge’s exploration around the island’s family and community values and ‘Surrender’ explores the dynamic between past cultural dogmas with contemporary concerns questioning gender, equality and ethnic diversity. Ultimately ‘Surrender’ is about the concept of forgiveness which Troubridge has sought to internalise within her work.

FAITH in politics, religion and community is explored broadly in Troubridge’s retrospective and whilst looking back at Malta’s past, the photographer’s exhibition is also an integration of her past and the past of the nation into an image of a hopeful future.