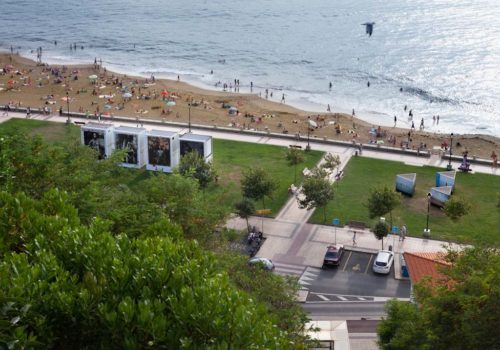 Last year, with photographers of different ages, nationalities and aesthetics, we explored the subject of Dreams, which can also turn into nightmares. This edition of GETXOPHOTO coincided with the celebration of the fiftieth anniversary of Martin Luther King’s renowned speech in Washington on 28 August 1963, and the words I have a dream.

We know what that dream of equality, of the eradication of discrimination and of hope for the future meant and continues to represent for North American society and, moreover, for everyone in the world who yearns for greater justice and equality. It was a dream that was tied to struggle. A struggle for what the Americans called civil rights, human rights. This worldwide fight took the form of demonstrations demanding autonomy or independence, improvements in living conditions, respect for dignity, the end of exploitation and equal opportunities in access to educations. It’s a long and perhaps endless list, because today, too, maybe more than yesterday or in more internationalized, more globalized ways, there continues to be inequality in the world.

In the 20th century, when photography triumphed as historic documentation or as a repository of the memory of circumstances and actions, the imagery of these struggles was forged. The images are not mere documents; they reflect, often through a heroization of the protagonists, the ideologies they are rooted in. It is disturbing to see in images how close is the visual resemblance between a worker in the USSR and a peasant in Mussolini’s Italy, or the proximity of the bodies of miners or workers from the Soviet steelworks to the nudist adulation of German youth during the years of the rise of Nazism. All this visual historiography, which runs through the century of the two devastating world wars, of the camps of the final solution, the ensuing genocides, the collapse of entire sectors of industry, the concentration of the population in the cities and the relative desertification of the countryside, among many other things, was recorded by photography and fundamentally disseminated by the press.

The world has still not improved, but the conditions and modalities of image production have changed. The rapid circulation of pixels on the Internet and the immediacy of the transmission of information, sound and movement have left their mark on the role of photo-journalism, although the sources are often impossible to discern, and their reliability is increasingly shaky. But we are in the era of the image.

And this is the context in which we approach the question of struggles. On one hand, those that take place on the ground—often interrelated— for peace, independence, freedom, health, education, life; and against violence, destructive contamination and humiliation without limit. But then there are the decisions taken by some photographers to join a fight-back or place themselves on the side of those who are in the thick of it, from their homes and in all parts of the world. The geographical origins of photographers are as international as they always were, and their aesthetic proposals are becoming ever more heterogeneous: encompassing strict documentary photography and symbolic staging, colour and black and white, snapshots or pictures that are skilfully lit and deftly composed, employing textual resources, with recognizable mechanisms and producers of meaning… So we are now faced with a panorama of photographic practices that stretch from the use of archives to amateur images, taking in satellite image recovery on the way.

If ,and we in no way claim to be exhaustive here, we evoke current situations, it would be illusory to ignore the millenarian and original reality of struggle. It begins with the instinct for survival, which naturally translates into a fight to death and for the subsistence of species. Mak Remissa illustrates the Cambodian proverb «When the water rises the fish eat the ants; when the water falls the ants eat the fish», taking us splendidly close to that reality. When we observe this situation in the animal world and learn the lesson therein contained, we night expect humankind to do everything in its power to avoid destructive discord and, well, become more sensible than the ants and the fish. Best not  to hold our breath though.