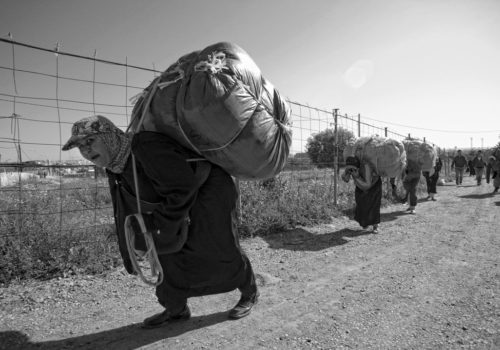 Every day at the pedestrian border of Biutz in Ceuta and El Barrio Chino in Melilla thousands of Moroccans, mostly women, make long queues to enter the cities and participate in an institutionalized smuggling that takes place every week from Monday to Thursday, within the same time, in broad daylight and with the tacit consent of the two responsible governments on both sides of the border.  The reason for the existence of this illegal trade lies in the difference in price of imported goods in the free ports of Ceuta and Melilla, and the ease with which residents of the neighboring Moroccan provinces of Tetuan and Nador to enter Spanish cities without the need for visas.
The operation is simple: the carriers enter Spanish territory and bear all the weight they can carry on their backs, or drag, and introduced them to Morocco for resale in the country on payment of relevant fees to all the Moroccan police involved.  On the Spanish side this traffic receives the euphemism of “unusual trading.” Spanish merchants who have their business booming in the parks near the border, say that everything is legal, nothing is contraband and they sell and they pay the taxes. The purchases are made legally in Spain, it is true, the irregularity comes when these products go to Morocco without paying customs dues. There is the business for both sides.
A business that seems to benefit everyone, many families can eat thanks to this smuggling, from the humblest of the provinces of Tetuan and Nador, traders on both sides through the borders of Ceuta and Melilla, the police and Moroccan customs officials benefit . But this lucrative trade does not produce any kind of development, quite the contrary, the employment generated is poor and almost slavery, is unstable and dangerous, creating an underground economy and, worse, promotes and institutionalizes corruption.  Every day when Moroccan police decide to open the border, men and women are struggling to cross and reach the other side where you will find dozens of trucks loaded with bags of used clothing, shoes, blankets, tires, boxes of potato chips , toilet paper, diapers, whiskey and countless household products. Packages can weigh up to 80 kilos and many women to load them and ruin their backs. They have prepared in their pockets the small change they need to pay tolls. Each carrier must pay five dirhams (45 cents) to each of the four officers who ask for the documentation, if not, they do not let them pass or send them to the end of the queue. For each package carried the carriers will receive about 50 dirhams (just under 5 euros) and, if lucky, make another journey.
According to the American Chamber of Commerce in Casablanca each job in the smuggling causes the loss of 10 jobs legal. Smuggling is estimated to generate in Morocco about 45,000 trashy jobs and another 400,000 indirect.
A business that generates millions of euros but needs an urgent review by both governments, as Morocco in 2012 complete the dismantling of tariffs with the European Union and then smuggling will lose its sense with grave consequences for thousands of people who can barely survive with it.