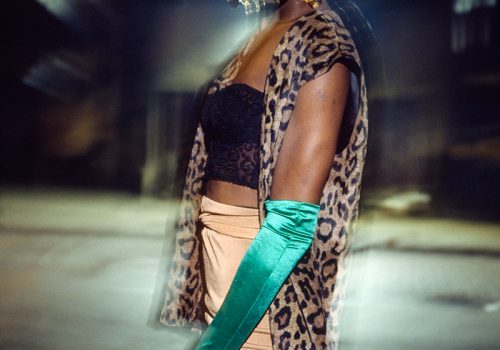 In Paris, London, New York, Simon Bocanegra, with his minimal equipment and his bullfighting posture photographed the night, fashion and underground for 30 years.

December 12, 2011, with the elegance that was natural to him, this autodidact of high flight who evolved in the most diverse spheres even the most marginal decided to draw us his reverence. In his Farewell to Simon, his friend writer Claude Louis-Combet tells us about “the marvelous beauty of this being who seemed to go through life and the world like a dancer, juggler, acrobat and tightrope walker, whose body presented the gait, the gestures ample and rhythmic of the one who associated without effort and without a false note, the vivacity of the instinct and the delicacy of the spirit. There was in him, indissociably the animal and the angel – superior animal and black angel – and that was what preserved this kind of impure and dark purity which radiated in the depth of its ambiguity, its ambivalence and the diversity of its facets. ”

Since meeting Christine Mingo, Simon Bocanegra has never tired of photographing her. She became his muse. His relationship with him was immediately privileged and it was the beginning of a collaboration that lasted until 2011. Simon taught him to stand with dignity in front of the goal in all circumstances. His leitmotif was: “Keep your nose in the air. (Raises her head and sniffs the air of time.) She made him meet the characters of his universe, especially transsexuals in the neighborhood of the Meat Market who, overnight in 1989 were propelled models alongside prestigious personalities at an exhibition entitled “HOT COUTURE” at the Prisunic Gallery. In the company of Simon, always in search of subjects to photograph, they crisscrossed New York, day, night, at the corner of the 14th street and the 9th avenue, Harlem and its ball culture, the nightclubs (Sound Factory, Tracks, Pyramid, Boy Bar, Save The Robots, Mars, Sally’s Hideaway, etc.) but they also made appearances in the upscale parties of high society.

Curator of this exhibition titled 1989 / New York Meat Market, Christine Mingo chose to show us a precise and decisive angle of Bocanegra’s work. The Meat Market is a New York neighborhood on West 14th Street, where a butcher’s hall was located. 30 years later, these images have manifesto value and position Simon Bocanegra as a herald and a forerunner of transgender aesthetics.

This exhibition is for Christine Mingo as a youth album. It is both a tribute to Simon and his friends Monet, Geneva and Epiphinny. At 17, she was the oldest in the group – the others were 3 to 4 years younger. It was in the years 83-84. Having left their families under more or less severe circumstances, they had to fend for themselves. At one time or another, they shared a studio, an apartment or a hotel room. This has helped to create an unwavering link between them that has protected them from all dangers: transphobia, sexual assault, racism, the AIDS epidemic, the ravages of drugs, the police and all the darkness imaginable and unimaginable. which transgender children of color delivered to themselves could face in New York in the 80s.

Simon kept a constant friendship with these girls. Through his eyes, he transfigured the course of their lives while becoming their mentor.

MONET: At the age of 15, Monet and I had evolved in the same circles. During our meeting in the mid-80s, many interests have helped to seal our friendship: modeling, make-up, house music, art and underground culture of the time. She was New Age before the hour. She possessed an unparalleled analytical mind that made her fascinating.

GENEVA: I met her much later at a time when I had already made my mark in life. She was innocence incarnated and gave the illusion of never taking anything seriously. Life for her was a fashion magazine. She had luxury tastes and spent her money without counting. She made me think of Holly Golightly in the movie Breakfast at Tiffany with a little side Josephine Baker. His passive-aggressive attitude was great art. It was love at first sight. I dressed her like my doll.

EPIPHINNY: She is one of the first girls I met. She initiated me to so many things. Against all odds, we immediately became accomplices. After the usual introductions, I remember that one of my first conversations with Epiphinny, then called Ronda, was about hormones. Until then I could not imagine that she was transsexual. Thirty minutes later, I come across her coming out of a taxi and holding an envelope in her hand. She asked me to accompany her and gave me my first injection of hormones. Unshakable as to her pride of being, her confidence was infectious.