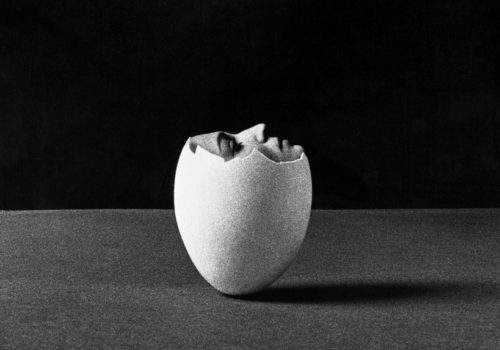 Arnold Newman told me a story of how young Ryszard survived the Auschwitz death camp. It was toward the end of the war and the Nazis had cranked up the killing machines. The order was given to round up the children at the camp and send them to the gas chambers. In an act of momentary benevolence, Amon Goeth personally tipped off Ryszard’s uncles (the musicians portrayed in Schindler’s List) that the soldiers were coming for the children. His uncles hid him in the barracks of the Jewish police. From the window, Ryszard watched as child upon child was crammed into a truck, and its precious cargo taken away.  – PW

As a 6-year-old child, I ended up alone in Auschwitz. In January 1945, we were liberated by the Red Army. They had a film crew with them. Later, my mother happened to see a newsreel of the liberation and saw me in it. She demanded that the projectionist give her some frames of the film. With this, she knew that I was alive and found me through an orphanage in Kraków. I happen to be lucky … many times in my life.

No one knew my father’s whereabouts. Someone claimed that they saw him being shot. But a few months later my parents bumped into each other on the street! Again we were together. It was wonderful, like in a good movie. – Ryszard Horowitz

Since the beginnings of photography, practitioners used various visual and chemical techniques to produce fantasy images that were not normally seen in one image by the naked eye. Photographs of fabricated family ghosts created an excellent livelihood for photographers of the late 19th century, at a time when séances with the dead were quite popular.

Many of Ryszard’s photographs were made decades before the invention of digital technology. He describes his work as photo-compositions, created with multiple camera or darkroom exposures onto film. The results are brilliantly conceived and seamlessly executed complex visual stories. Though his methods have changed, Ryszard the Wizard still conjures up the spirits whenever he so chooses.  – PW