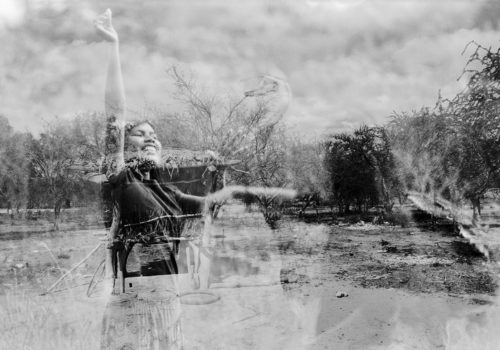 Nopeyac Wo* (The Owner of the Shadows)

This is a photographic work where a shaman from a Wichi indigenous community in Argentina intervened. He promised to help me take these photos, the double exposures made on camera I discovered when the film was developed.

What you want to be seen

Light exists as a continuous and eternal principle. On the other hand, darkness is not, as is usually supposed, an end, but a prelude. – John Berger

Many years ago John Berger wondered how it was possible that the fragile petals of the poppy have enough strength to break the capsule that contains them before showing themselves. He concluded that the strength lay in color. That he wanted to show himself to the world and be seen beyond the mechanical logic of nature.

Following this line of thought you can find photographs in which unforeseen things emerge, scenes that want to be seen and that escape the usual topics of representation. They present themselves, say, taking something of their own and randomly from the photographic device, as is the optical unconscious, and something foreign that is determined by the place and the situations that unfold there.
Now, what happens then when the elements of the device are aligned with instances of the transcendental order as are the ancestral shamanic rites?

A small key to access this work by Rubén Romano can be found in the last photo of this book. The portrait of the Tiluk shaman in the middle of a ritual act. The expression of the face, the gesture of his mouth and the posture of his hands show us the state of trance and ecstasy. We are facing someone who is not looking, is not living as ordinary mortals look and live, but is looking with the eyes to see beyond. He is absorbed in the overwhelming experience that follows the ingestion of entheogenic plants that allow him to connect with the world of the ancestors. Through the half-open mouth Tiluk is listening to the distant voices of nature and the sacred in the Gran Chaco. The shaman sees. Thus, and in this way, it diagnoses and articulates the healing process, the prevention of catastr ophes or the reception of gifts.

Nopeyak wo in the Wichí language means the owner of the shadows, names the figure of the photographer who can take what is projected in the shadow (or from it?), As an extension of being or nature. It is opposed to the recurring idea that names photography as a drawing with light.

The images that appear, and we see, come from the shadows – not from the darkness – but from the sacred in the shadow of the Wichí cosmogony. The shadows illuminate us and open delicate layers of a veil. Thus we access a different order of perception. These same layers at times let us see details and at other times reorder the reading plane. The symbolic presents itself, like the colors in the poppies.

The sacred bird carancho of the place is reiterated in the double exposure (random?) Of the shots. And it guides us through the transit and activities of the community. What at first appeared as a random and erroneous situation (exposing the same sensitive material twice) gave rise, in truth, to the shamanic interposition. In this view of Tiluk the way was paved so that the images appear and materialize in consonance with the heart of the mountain.

Rubén Romano was born in Resistencia (Chaco, Argentina) in 1961. He studied Geophysics at the UNLP, without completing his degree. After doing several initial photography courses and improved himself by attending the workshops of Juan José Traverso, Juan Travnik, Néstor Crovetto, Alexandre Belem (Brazil), Nelson Garrido (Venezuela), Julieta Escardó, Ataúlfo Pérez Aznar and Julio Fuks among others.

* Nopeyac Wo, in Wichi indigenous language it means “the owner of the shadows”