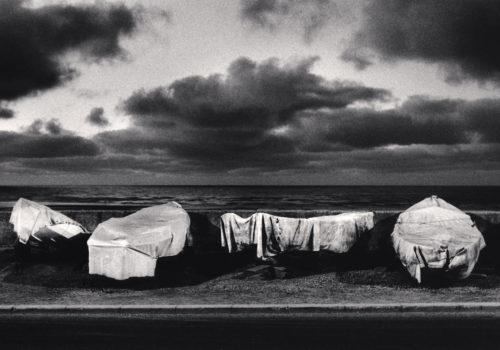 Robert Mann Gallery presents the works of photographer, Michael Kenna, known for his beautiful and sensitive black and white landscapes. Made over forty years ago, many stored away in a series of negative files, come rediscovered images that reveal a Northern England from Kenna’s youth that has drastically changed over time. While Kenna normally spends his time traveling extensively making work, the COVID pandemic afforded Kenna the time to revisit and print images from 1983-1986 when he made a series of trips to explore the areas where he grew up.

Kenna was born in 1953 in the small industrial town of Widnes in Northwest England, the youngest of six children. He grew up in a poor, working-class, Irish Catholic family and attended a seminary school until the age of 18 with the intention of becoming a priest. He went on to study at the Banbury School of Art and later at the London College of Printing, before moving to the United States in the late seventies. The adjoining counties of Lancashire and Yorkshire, where Kenna photographed in the early eighties, have much in common regarding their industrial development. Fiercely competitive, they share a border, a spine of mountains known locally as the Pennines, which helps to produce rain. The rise of a powerful cotton and wool industry, and the building of innumerable mills, canals, railways, chimneys and terraced worker houses, have been attributed in part to these high levels of precipitation. The local textile industry proliferated until the second half of the twentieth century, when there was a sudden, rapid decline and eventual decimation. It was during this precise time period that Kenna returned to the area to photograph, during the day and also at night.

Influenced by many photographers, including Bill Brandt and Eugene Atget, Kenna experimented with long exposures and different printing techniques to capture the mystery and atmosphere of the decaying cotton and wool megaliths, bringing forth light and beauty to these desolate places. This series concentrates on the interaction between the transient conditions of natural landscapes and man-made structures. A Nazraeli Press book, with an introduction by Dr. Ian B. Glover, accompanies this exhibition. Signed copies are available from the gallery.

Michael Kenna is one of the most widely exhibited and beloved photographers working today. Recently Kenna was awarded the Special Photographer Award in Hokkaido, Japan. His work has been shown at the the Tacoma Art Museum, 2012; Moscow Museum of Modern Art, 2011; Palazzo Magnani Museum in Reggio Emilia, Italy, 2010; and Bibliothèque Nationale de France in 2009. Kenna’s photographs are included in many public collections including the National Gallery of Art, Washington, D.C.; the San Francisco Museum of Modern Art; the Shanghai Art Museum; the Tokyo Metropolitan Museum of Photography; the Museum of Decorative Arts, Prague; and the Victoria and Albert Museum, London. Born in Widnes, England in 1953, Kenna currently lives and works in Seattle, Washington, USA.