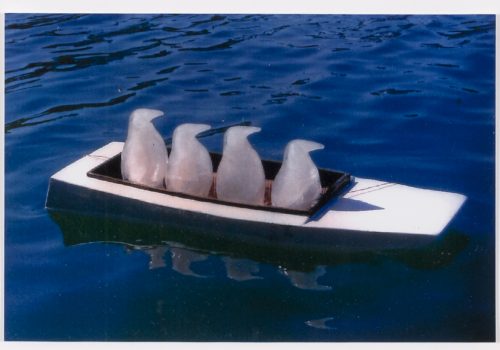 Galerie Thierry Marlat presents the photography of Robert Grosvenor, a major artist on the American scene since the 1970s. Mainly known as a sculptor, Robert Grosvenor is also the author of works on paper and photographs. The Max Hetzler gallery exhibits his recent sculptural creations from January 18 in Paris and the New York gallery Karma has devoted an exhibition to him since January 8. The Dijon consortium organizes from November 2020 to February 2021 the third personal exhibition of the artist in his place.

Robert Grosvenor is an artist who escapes classification. His photographic work, like his sculpture, emphasizes lightness and scale, the interplay of materials, colors and light; it questions the deep nature of the world which integrates man as much as it inspires.

In an era when art photography is often acclaimed by its over-dimensioning without it being  always relevant, Robert Grosvenor’s photography forgets the large format to restore its strength to the image and recall its lightness which also makes it powerful.

27 Pictures: the collection of photograhies exhibited is a selection made by Robert Grosvenor and Thierry Marlat from prints produced between 2000 and 2013. We find the artist’s spirit in his sculptural research, his humor and lightness and the depth of his exploratory thinking. From Elvis Presley’s house to places that cannot be located, the photographs, all labeled Untitled, offer us a walk in the sensitive world of an artist who is decidedly unequaled and certainly unmatched. In the edition of 2 plus 1 Artist Proof, the sculptor and photographer Robert Grosvenor opts for the preciousness sought by the largest collections in contemporary art.

Robert Grosvenor speaking about his photography : “I was trying to capture some of the odd things that we see everyday, wherever we are. I was drawn to strange juxtapositions of things, why one thing is next to another, and how one thing next to another becomes something completely different. It’s so interesting and strange. It’s also important for me to be close to the water, so I can put things out on the water that maybe shouldn’t be there. Like, I could toss in little donuts or little toy penguins. Stuff like that. I definitely think there’s some humor there. A certain odd beauty, if you will.”