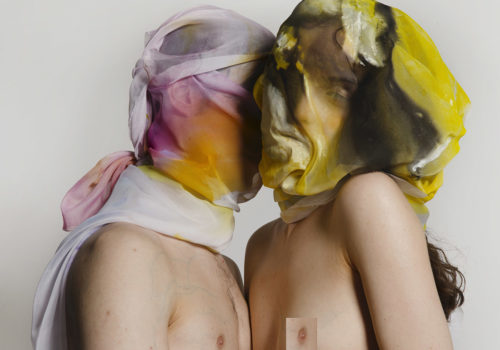 Richard Taittinger Gallery announces the US representation of Charlotte Abramow and presents her first New York solo   exhibition, Started From The Body. An exhibition based on the representations of all women through an inclusive and mindful gaze.

We asked Charlotte to tell us about her new show and presented work :

“The body, that’s what started it all. The body you see in magazines and the one you look at in the mirror.

These representations where you don’t necessarily recognize yourself, even when thin, white, young, and able bodied. What a shame! Yet, what we always see and feel is the posturing of desire—an image replete with seduction, validation, or certain type of one unique beauty standard. These are things I have felt ever since I was young: the sensation of performance of femininity. Something rather unnatural. A female body always under the pressure of observation, objectification, sexualization, and judgment.

I would like to desexualize the so-called female body and show it with a different perspective than an eye of desire, a tool to please the other. I wish to show the honesty, the fragility, the solitude, the humor, and even the reveries of young women. With my experience as a growing young woman, I wish to show the gaze upon the evolving body. To make fun of these hypersexualized attributes and instead show curiosity, absurdity, and kindness; a playfulness with our body!

To laugh with it and not at it. Perceive our body as a painting, a landscape, or a wrapping, a manifestation brought to life. Bulges become clouds; stretch marks become the branches of a rivers’ delta.

And then, I wish to recover possession of this body and its power for desire and pleasure. By oneself and for oneself; independence and emancipation. I discover the political power of the body. I slowly advance on the road of feminism that feels visceral but still so much larger than I. I gradually understand how gazes blinded by stereotypes have locked up our bodies according to our appearance. I am learning how forces of power and domination relate to female bodies and classify them according to gender, race, and class. I would like to highlight the voices of these women, among many others, who are always fighting for more justice, understanding, and equality. This is just the beginning of my long journey to understand the world through women and how we can fight together to make it better.”

Charlotte’s work has the reverence for the outspokenness of one’s body. The inner & outer imperfections that make a body a natural beauty.

“I take inspiration from the colors of my childhood, my dreams, the world where I live and also the surrealist currents. I love the intelligent art of Magritte and the colors and colorful compositions of Joan Mirò. I love how Sophie Calle poetically articulates images and words. I take inspiration from my intimacy as well, from the stories of others, from what we think only affects us but is in fact collective.”

Charlotte’s body of work reveals the ode to color, body autonomy, and self-acceptance. In work such as Les Enveloppes — Guimauve, 2015, Paris this image comes from a project around the body.

“I wanted to show another image of the naked body than the carnal or sexual one, and to show something beautiful, evocative and artistic in spite of what we tend to hide: the imperfections, the folds, the bulges. Like a new statue from the 21st century, the texture of the skin becomes almost gourmand, like bread dough or marshmallow.”

Absurde Censure, 2018, Paris was an image originally taken for a project about a couple. Charlotte wanted to post the original image uncensored on Instagram. “But of course, the so-called female nipple being extremely dangerous for society, the application immediately deleted my image. Annoyed, in the moment, I open Photoshop, select the man’s nipple, copy it and paste it on the woman’s nipple. This time, the application accepts the image. A nipple, however, has no gender, but in 2018, and still today, to censor a so-called female nipple, you just have to hide it with a so-called male nipple.”

Charlotte keeps her promise as being a vessel between unheard voices and our society. Her models of photography are real people with their real stories. Picking the people has always been quite instinctive for Charlotte.

“I don’t have any criteria. I like people of all kinds and I can find beauty in everyone. I like to show people in the right balance between strength and fragility, kindness and assurance. More recently, I have been taking portraits of women who are more involved and have political voices. I am interested in keeping in mind through photography anonymous or known women, who fight for ideals of social justice, but being an activist is not a requirement for me.“

“And even the person who thinks she is the ugliest or most insignificant could pose for me, so many people don’t even know how beautiful they are.”

“This is my first short story, there are multiple short episodes in the series, H24, 24h in the life of a woman which has just been released on ARTE, a European cultural channel. The series talks about the violence made to women which hides in the daily life and many aspects of their lives. In my film, a young woman intervenes in a violent marital dispute in the parking lot of a fast-food restaurant”.

Charlotte shows the raw truth without using typical everyday language, but instead plays with visual senses such as incorporating dynamic color aspects, playful yet sensual imagery, and evocative models.

“I am used to thinking before I make my images, to build them up beforehand. I sometimes leave myself more freedom and improvisation on the shoot. I give myself a starting point or a framework and I create around it according to the moments. For my videos, I first edit in my head before making the images. I build and plan the video object shot by shot.”

Charlotte uses both still shots and video work to bring her idea into fruition. This is a main focus in her exhibition: still photography and cinematography. You will be able to see both come to life at the gallery.

Born in Belgium, lives and works in Paris

Charlotte Abramow is a Belgian photographer and filmmaker whose work combines seriousness and absurdity. She began taking pictures of her friends at the age of 7, and became passionate about image-making at the age of 13. By 16, she was an intern at the Rencontres D’arles, where she met Paolo Roversi, who later wrote an article about her images for Polka Magazine in 2011: “The Fragility and the Soul of a Warrior.”

In 2013, she moved to Paris to study at Gobelins, L’Ecole de l’Image, where she graduated in 2015. She was a finalist for the Prix Picto de la Jeune Photographie de Mode in France in 2013 and was the winner of the Prix Picto de la Jeune Photographie de Mode the following year in 2014. In 2017, she began directing videos such as “The Law of Murphy,” “I Want Your Eyes” and “Les Passantes.” The same day of Les Passantes’ release, International Women’s Rights Day, it was censored under 18 on YouTube for “offensive content.” This was reversed after it was met with protests by users, and the piece later won the “Women’s Rights Prize” awarded by the State Secretariat for Gender Equality. In 2019, Charlotte directed Angèle’s feminist video clip Balance Ton Quoi (96M views on YouTube). She was featured in the group show, The Female Lens, at Richard Taittinger Gallery in New York City.

During 2020, she conceived and directed “Le Petit Manuel Sex Education” for Netflix, for the release of season 2 of Sex Education — a 64-page editorial object on the theme of sex education made up of photos and texts in France.

Richard Taittinger Gallery was founded in 2014 by Richard Frerejean Taittinger at 154 Ludlow Street. A 6,000 sq ft space on 3 floors designed by Studio MDA. A pioneer of New York City’s Lower East Side art scene, today RTG is surrounded by cultural institutions including the New Museum, the International Center for Photogra- phy, and the Brant Foundation. RTG represents a diverse roster of leading international artists at various stages of their careers covering every medium and photography. Working closely with Museum curators, RTG had successfully placed works by our artists in over 25 prestigious Museum collections.

RTG advocates for price transparency and democratization of the art world showing artists from outside the traditional art world system together with established talents. In July 2019, RTG launched a print program and in June 2021 launched its NFT program offering affordable works to encourage collecting.

Charlotte Abramow : Started From The Body