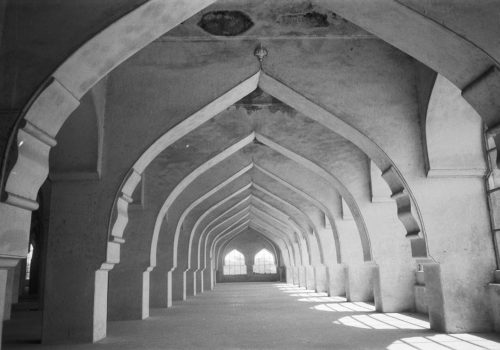 From March 15 to April 15, 2021, the House of Photography in Tashkent is organizing the exhibition “Going back in time and the Silk Roads”. Centered around the work of Franco-Austrian photographer Renate Graf, the exhibition hopes to pay homage to a bygone era.

This is an atypical exhibition that takes place until April 15 in Tashkent. Entitled “Going back in time and the Silk Roads”, the exhibition features Franco-Austrian photographer Renate Graf as part of the Tashkent House of Photography.

The photos on display come from one of her trips on the Silk Roads, organized in 1993, with 109 black and white prints and analog photographs. The charge d’affaires of the Embassy Brice Roquefeuil initiated the exhibition, with the ambition of perpetuating memory. This work is supported by the collaboration of the French Embassy in Tashkent, Orano, GoscomGeology and JCDecaux.

In the footsteps of a Buddhist monk

In 1993, Renate Graf embarked on a journey on the Silk Roads to follow in the footsteps of a Buddhist monk, Xuanzang (602-664), who in 627 made a religious trip between India and China, taking with him the first Buddhist manuscript. The exhibition takes the visitor on this same journey, which is crossed by history, the sacred and the myth.

Renate Graf began documentary work with the help of a small automatic Canon camera. As she describes to Novastan, she didn’t start photography to take the perfect shots but to capture the present moment and express her feelings in it. “It was an idea in my head, a  feeling I had, and then I looked for a way to express it and materialize it so that it could go on forever,” says Renate Graf.

From the sacred to global warming

In detail, the exhibition gives pride of place to three major themes, prepared with the help of curator Nicolas Martin Ferreira. First and foremost is the Silk Road and its nature, its architectural details captured by the artist who testify to a past social and cultural era. The artist claims to be marked by Xi’an and the Taklamakan Desert. Next, Renate Graf tries to document the sacred landscapes, notably the beauties of India where she discovers the mixture between the profane and the sacred. Finally, the photographer wanted to illustrate the melting ice due to global warming, especially in Siberia.

Regarding Renate Graf, Nicolas Martin Ferreira talks about images that “tell at the same time the grandiose and the intimate, the disintegration and the rebirth”. With this historical truth with the value of a memorable testimony, the artist confronts ice and desert, the sacred and the profane, the expanse of uncluttered landscapes in everyday life of timeless people. “I am a total nomad, without borders and without a country,” says Renate Graf.

Renate Graf is currently working on new projects with Nicolas Martin Ferreira. She wants to include Brazil in her poetry and adds Panama to her exhibitions, which will be postponed until next year. She covets an artistic project in Bordeaux and an exhibition in China.

Novastan is the only European media specializing in Central Asia in French, German and English. Founded in 2011, it aims to cover this little-known region, without clichés.