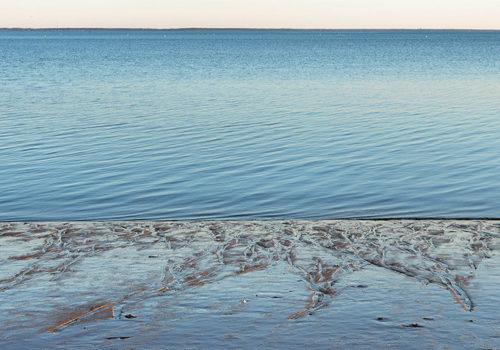 Inspired by Virginia Woolf ’s novel The Waves, this collaborative project brings together the work of creative partners Alex Webb and Rebecca Norris Webb. This intimate collection serves as a pandemic logbook in words and images, created while the couple was largely sequestered on Cape Cod from March 2020 through May 2021. Rebecca provides original, hand-written poetry that punctuates her lyrical photographs and Alex’s panoramic seascapes. Their images serve as poignant meditations on what it means to be both deeply connected to the world around us and profoundly isolated from much that we hold dear.

“Far from the vibrant urban worlds where I’ve often photographed, I followed the subtle movements of time and tide, wind and water. Meanwhile, Rebecca photographed the waves of light as they washed through our house of many windows—and wrote spare text pieces to try to emotionally navigate this unsettling time, when so many we know have been caught in its undertow.” —Alex Webb, May 2021

Alex Webb has published more than 15 photography books, including The Suffering of Light, a survey book of 30 years of his color photographs. He’s exhibited at museums worldwide including the Whitney Museum of American Art, N.Y., the High Museum of Art, Atlanta, and the Museum of Fine Arts, Boston. A Magnum Photos member since 1979, his work has appeared in The New York Times Magazine, National Geographic, and other publications. He has received numerous awards including a Guggenheim Fellowship in 2007. His most recent books include La Calle: Photographs from Mexico and the collaboration Brooklyn: The City Within, with Rebecca Norris Webb, published by Aperture in fall 2019, and exhibited at the Museum of the City of New York.

Originally a poet, Rebecca Norris Webb often interweaves her text and photographs in her nine books, most notably with her monograph, My Dakota — an elegy for her brother who died unexpectedly — with a solo exhibition of the work at The Cleveland Museum of Art, among other venues. Her work has appeared in The New Yorker and The New York Times Magazine, and is in the collections of the Museum of Fine Arts, Boston, The Cleveland Museum of Art, and the George Eastman Museum, Rochester, N.Y. Rebecca is a 2019 NEA grant recipient. Her most recent book, Night Calls — in which she retraced the route of some of her now 101-year-old country doctor father’s house calls through the same rural county where they both were born — was released by Radius Books in December 2020.