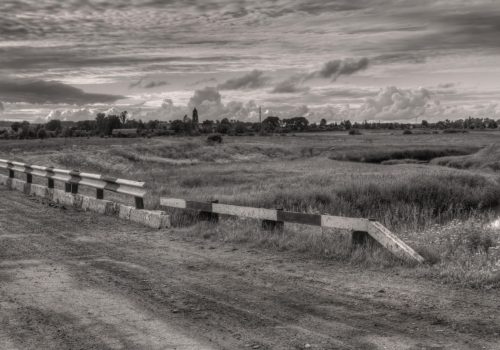 Our correspondent in Beijing, CYJO, met with Qingjun Huang, one of the great photographers of the daily realities of life in China. We hereby present one of his first works, called Steam Locomotives. Tomorrow we will present the second part, Family Stuff.

China continues to rapidly develop, and it’s predicted that this internal development will continue for the next 15 years. Some equate 1 year of growth in China to 10 years of growth in the west. What is certain is that the speed of development, especially in the first and second tiered cities is like no other. In some cases, it’s the everyday mindsets of the Chinese population who are racing to keep up with this modernization as new elements and styles of living blend into the old.

Born in 1971, in Daqing, Heilongjiang Province, Qingjun Huang, who has grown up with Mao’s utopian philosophies as a child, has spent over half of his life recording some of these changes through his two major works, “Steam Locomotives” and “Family Stuff”. He has traversed different parts of China capturing the last remaining steam locomotives. And he has also collaborated with Hongjie Ma, capturing the changing lifestyles and environments of Chinese families. Their environmental family portraits expose the intimacy of private objects in a public backdrop.

After being introduced to photography at the early age of 7 through his uncle who was an amateur photographer, he decided to study photography at a vocational skills high school. There, he learned with a Hai Ou 4A (“The bird flying above the sea”) camera, much different from the Nikon and Mamiya digital and film cameras he uses today.

Qingjun Huang’s work has been exhibited in Germany, Sydney, Korea and China. He won a UNESCO hosted competition for his “Steam Locomotives”.

“Steam Locomotives” – How did this project come about?

Steam locomotives made a deep impression on me when I was a child. When I first saw this huge monster spouting smoke and flames, I ran into my mother’s arms, frightened. My mother assuaged me and said it was a steam locomotive named “Mao Zedong” that can take us to my grandmother’s house and the outside world. A great respect for this dark, iron monster arose. As I grew older, steam locomotives started dissipating into history, and modern diesel trains became more plentiful. I slowly forgot the power and presence of these machines I admired so much…until in 1997, when I went to take some photographs in the Peony River City in Heilongjiang Province. There, I found a very narrow-gauge railway on the left hand side of the highway. This abandoned looking railway was still carrying steam locomotives to haul timber from a nearby forest. This encounter sparked my desire to capture the last remaining steam locomotives in China.

The project started in the beginning of 1998 where I took my first steam locomotive 72 km journey on a 28-ton steam train from Reed River to Willow Mountain. The carriage was less than half the size of a diesel train, and there was no electricity or running water. There was no intercom used by the conductor. The only sounds I could hear in the carriage were from a mother crooning her baby and from workers snoring in their sleep. The train went at a pace of 10-15km/ hour, a peaceful stroll that can’t be found in today’s mechanized society.

Anxious to capture this rare steam locomotive experience, I traveled from one forest to another, from one locomotive to another capturing various scenes – the trains’ relationships with the community and villages, the relationship with the current train industry and China’s development through landscape shots, and the destruction of unused steel trains where it’s materials were to be recycled.

Can you describe an image from this project that resonates with you?

There’s an image of a steam train with a red ribbon and Chinese flag framing the front face of the train. And in that painted red ribbon is a gold slogan. The slogan says, “Within the 20th century, all people will move together, will have one heart, will move forward, and we’ll put all our strength in executing the 4 modernizing elements – military, agriculture, industry, science & technology”. I grew up with this Republic of China slogan that said that China would be modernized and have an ideal, harmonious society where food was free. This was our symbol of hope for the future.

It’s 2011 now, and although this philosophy has not been fully executed, I grew up under poor conditions where getting new clothes and eating meat was a rarity, only done once a year during Chinese New Years. Now, I don’t suffer the same hardships, and it’s much better than before. China is at a very good place now.

This interview was conducted and edited by CYJO.
Interview Translator: Yanyan Liu