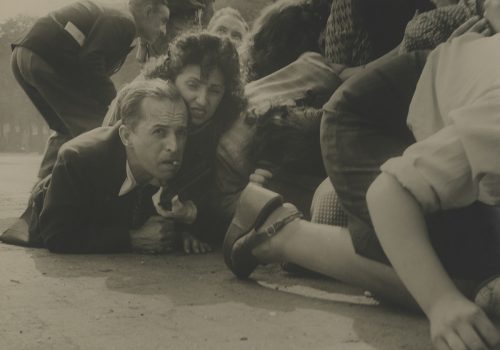 Gitterman Gallery exhibits vintage photographs from the 1930s–1950s by Pierre Jahan (1909–2003). In the mid twentieth-century in France, a time when serious ideologies in art played out against a backdrop of rapid political and social change, Pierre Jahan emerged as a figure uniquely equipped to produce compelling photographs that could often slip seamlessly between the disparate worlds of Surrealism and reportage. He was a successful commercial photographer, whose advertisements, editorial work and book cover images were often aligned with the Surrealist ethos, while his reportage work memorably captured historic events and preserved history.

During World War II Jahan made one of his most significant bodies of work, La mort et les statues. In 1941 he snuck into a warehouse in the 12th arrondissement of Paris and photographed sculptures that were taken from their public perches to be melted down for their metals to aid the war effort for Germany. These photographs exemplify Jahan’s ability to utilize a diverse visual vocabulary of surrealism and reportage to create distinctive work with depth and complexity. The resulting 1946 book which paired these images with Jean Cocteau’s poetry, La mort et les statues, remains one of the most profound photographic books of the period and a remarkable example of the artistic potential of image and text.

Born in Amboise, France in 1909, Pierre Jahan moved to Paris in 1932 and got his first commercial assignment after meeting Raymond Gid, an illustrator and graphic designer in charge of a small advertising agency. In 1934 he started work for Plaisir deFrance magazine (later known as Images de France) and continued to be their primary photographer for 40 years. Early on in Paris, Jahan also met Emmanuel Sougez, a photographer and director of the photography department at the magazine L’illustration. Sougez welcomed him to the Groupe du Rectangle (an association of Parisian photographers inspired by the American “Group f/64” that valued form and technical mastery) where Jahan exhibited alongside Laure Albin Guillot, Rogi André, Henri Cartier-Bresson, Francois Kollar, Man Ray and others. In 1938 Jahan photographed the famous Exposition Internationale du Surréalisme and later made portraits of artists and writers such as Picasso, Braque, Colette and Cocteau. By 1939 Jahan started documenting wartime Paris from the occupation to the liberation. He photographed at the Louvre when the masterpieces where removed for protection during the war and then again when they returned home.

In 1949 he joined the Groupe des XV alongside Robert Doisneau and Willy Ronis, among others, to lobby for the conservation of France’s photographic heritage and to further promote the art of photography from a humanist perspective. In the same year he photographed the tombs of 25 Kings and Queens of France from the 13th to 16th Centuries in the Saint-Denis basilica and published with Jean-François Noël, Les Gisants (Éditions Paul Morihien, 1949.)

I have always been fascinated by play of light… and fate. Like everything which lies in the dark, human beings and things start a kind of drift similar to dreaming, a dream or a nightmare, which, from ecstasy to fear, opens the door to this fourth dimension, in which, maybe without really believing in it, I always lived. It is all this that undoubtedly drove me to photography. — Pierre Jahan.

Though my introduction to Pierre Jahan’s family was made through Michèle Chomette who represented the family at her gallery in Paris for over 30 years, I first became aware of Jahan’s work when I worked for Zabriskie Gallery in the early 1990s. We were in a bit of a tough economic time and often at the end of the year in lieu of a raise, Virginia Zabriskie had me choose a few works from her owned inventory that I liked and she selected one to give me. The first time this happened I received a Pierre Jahan print from his La mort et les statues series.

It feels fitting that we are presenting this exhibition at this time since Virginia just passed away in May at the age of 91.

Virginia Zabriskie began her career as a dealer in the early 1950s at a time when there were very few women in the field. Her passion for art of any media and her broad knowledge base was distinctive. Her gallery in Paris on rue Quincampoix, around the corner from the Pompidou, led the way for photography galleries in Paris well before Paris Photo was even a thought. Her name still opens doors for me there. I don’t know where I would be today without the opportunities she provided me. My gallery is now in the building that Virginia had her last gallery in and I think of her often. I miss her greatly.

Concurrently, Clara Ha of CHART is presenting After Virginia, November 8–January 11, 2020, an homage to Virginia Zabriskie by revisiting her 1989 show “Abstraction in Photography”. After Virginia extends this conversation into the 21st Century by revisiting work by twenty-eight artists from the original exhibition and adding six contemporary artists who have continued the dialogue with the medium in the 30 years since. https://chart-gallery.com/