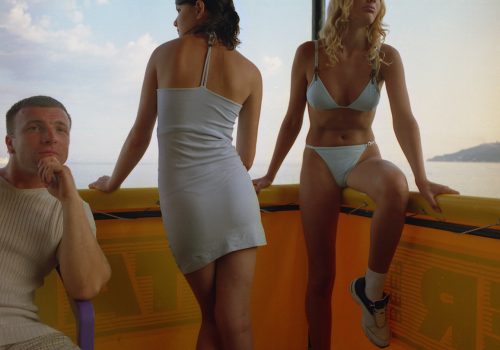 This summer saw the passing of Sergei Chilikov, an outstanding photographer who has made a considerable contribution to Russian photography.

A candidate of philosophical sciences and the author of three brilliant books on philosophy, he organised photography festivals in Cheboksary and Yoshkar-Ola between 1981 and 1992. These festivals became a very important factor in the development of Russian photography.

The museum, whose collection includes some 700 images by Sergei Chilikov, has actively collaborated with the artist since 2000, exhibiting his work both in Russia and abroad.

Chilikov came to photography in the second half of the 1970s, during the Brezhnev era of stagnation. Not only did he express this time, he was ahead of it. Sergei Chilikov invented his own method, ‘photo provocation’. His camera directed at an individual became an emanation of the attention this person was effectively deprived of in their monotonous everyday life, severely restricted by the framework of the absurd Soviet system.

His photo performances expressed the collective unconscious of Homo Sovieticus, yet also provoked participants to the self-expression that is ‘natural’ in humankind, although well concealed behind artificial rules and norms. This produced a striking tension between the static of ‘unnatural’ poses and the dynamics of a person’s internal state. In his works Sergei Chilikov articulated the immanent gap between the dream and the surrounding reality. Chilikov’s images are the visualisation of a Chekhovian worldview in which the absurd, and the torment of the free spirit are realised within the closed contexts of banal everyday existence.

To build his complex multi-level compositions, Sergei Chilikov used the theory of de-familiarisation. He began his photo performances in a far-off Russian province where the realities were only a backdrop; what was real and most important in the people he magically portrayed as he performed a shamanic dance with his camera turned out to be universal, understandable without translation. As a result the method he first developed in the distant USSR, still isolated from the outside world, was in universal demand. His exhibitions were a spectacular success in France, Italy and Britain.

It seemed to many that Chilikov was strange and half-insane, but only the holy fool can tell the truth. This crazy photographer told the existential truth about every one of us with words, in his books, and in his photographs. Moreover he was endlessly kind, he truly loved life and people.

Sergei Chilikov frequently participated in the Moscow ‘Photobiennale’, the ‘Fashion and Style in Photography’ Biennale, the festival Rencontres internationales de la photographie d’Arles (2002), the International Month of Photography in Rome, the Photo London art programme, etc. He took part in group exhibitions at the European House of Photography and other European museums. Works by Sergei Chilikov are held in collections at MAMM/MDF, as well as in private Russian and foreign collections. Chilikov was awarded the Silver Wreath prize.

Sergei Chilikov was born in 1953 in Kilemary settlement, Mari El Republic, and graduated from the Yoshkar-Ola Pedagogical Institute. From 1976 to 1991 he taught philosophy at the University of Yoshkar-Ola. He is the author of three volumes on philosophy; before his death he completed a fourth book, which MAMM hopes to publish. Chilikov took up photography in the 1970s. He died in Yoshkar-Ola, on 21 June 2020.