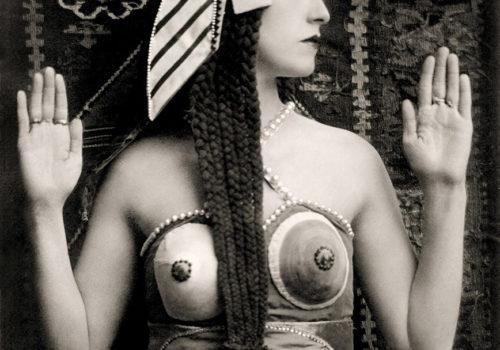 E.O. Hoppé and the Ballets Russes pays homage to the genius of two men: Sergei Diaghilev, founder of the Ballets Russes, and Emil Otto Hoppé the photographer whose unparalleled portraits capture the energy and excitement of the company during their London seasons, from 1910-23.

As one of the most influential art photographers of the first half of the twentieth century, in 1920 Hoppé (1878-1972) was “the most famous photographer in the world” according to legendary curator and historian Bill Jay. After training in drawing and composition in Munich, Paris and Vienna in the late nineteenth century, Hoppé chose photography as his medium in 1902, shortly after settling in London. Showing his works at London’s Royal Photography Society, his reputation quickly grew and he was invited to exhibit with The Linked Ring Brotherhood, the British counterpart to other notable photography societies such as the Vienna Camera Club and the New York Photo– Secession. In 1907 he opened his first commercial studio where he became famous for his portraits of the artistic, literary and political elite.

With both studio portraits and ballet sequences, Hoppé’s visual chronicle presents not only the leading stars of the Ballets Russes, such as Vaslav Nijinsky, Tamara Karsavina, Adolph Bolm, Michel and Vera Fokine, Olga Spessivtseva and Leonide Massine, but also celebrities in Diaghilev’s orbit, such as Mathilde Kschessinska, Anna Pavlova and Hubert Stowitts.

These behind-the-scenes portraits provide us intimate access to many of these now- legendary dancers whose extraordinary talent and unprecedented costumes, sets, music and dancing made them the most famous ballet troupe of the first half of the 20th century.

The pure sensuality of these portraits reveals the essence of dancers who, in performing their innovative choreography in costumes by Léon Bakst, Nicholas Roerich and Alexandre Benois, among others, took their audiences by storm with performances that shocked the senses and seduced the Modern world.