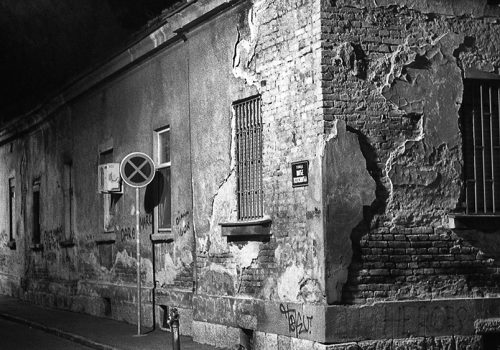 Gradually laying out the dark

During the 1990’s my country, Yugoslavia, broke down. The former republics teared each other apart and gained independence through wars and terrible violence. This violence invaded both everyday life and the minds of the people. A violence, manipulated by all at every opportunity: territorial wars, ethnic and religious conflicts, mafia-type system, power struggles, greed and jealousy, built-up bitterness…

In Serbia, Slobodan Milosevic needed the violence, chaos and conflict to stay in power. The merciless law of the jungle was the rule. Paramilitary groups spread fear, weapons were everywhere, the embargo then the NATO bombings made citizens hostages. The borders closed, inflation broke records and society sinked into economic and cultural poverty. The values we had constructed in previous times collapsed.

Most of my friends managed to leave the country at the beginning of the conflicts. I lived in Serbia throughout; with all the necessary optimism to hang on and stand up.

Finally, the bloodshed dried out and Milosevic was toppled. But of course not everything changed. Society had lost itself, and the violence is still here, it has seeped in everywhere. The optimism that had kept me going started to fall apart when I realised that the exit of Milosevic did not fundamentally alter things. Realising that was the most violent thing above all, black spilled over everything. I needed to go. I needed to flee that darkness.

In 2011, I returned to Serbia and Belgrade. Photography  allowed me to confront all this. Sylvain Prudhomme puts words on it: gradually altering the darkness.

Sladjana Stanković was born in 1966 in Trstenik in ex-Yugoslavia. She has been living and working between Paris and Belgrade since 2002. Her steps and projects have often led her to look for alternative human stories in the Balkans. In Serbia, she cast her eyes on factory workers and miners who kept on working when everything around them had stopped. In Belgrade, Roma kids let her in their world. She spent a lot of time following them in the slums where they live. Attentive to those on the margins, she met orphans stranded in the mountains in Bulgaria and spent a year photographing men who live in the streets of Paris.

To tackle the more intimate subject of her own relationship with Belgrade, she chose to work with the French novelist Sylvain Prudhomme she met there while he was in residence. The result of their creative conversations, Aménagements successifs du noir (Pripitomiti Tamu / Gradually altering the dark) was first presented in 2014 during the Krokodil literary festival and at the Institut français de Serbie, and at the Academy of Fine Arts in Sofia as part of the Bulgarian month of photography. The publication of an eponymous book in 2019 was the occasion for a new version that was first presented at the Galerie Folia in Paris during the Week-end à l’Est festival, and more recently in Fontainebleau for the Phémina festival.