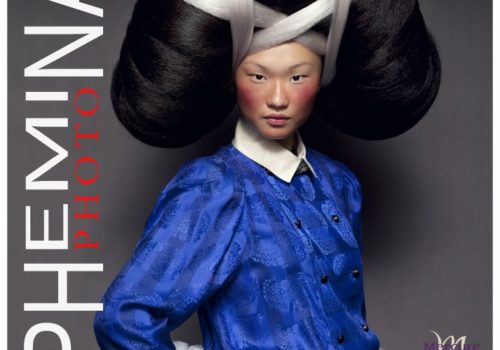 We showed you last week the images of Valérie Simonnet presented during the Phémina festival in Fontainebleau. We asked her to keep a journal during the festival weekend: she did better than that by bringing us this day which is dedicated to Phémina!

Five years ago, the idea of ​​a new kind of festival, dedicated to the place of women in photography, germinated. But far from encouraging divisions and separation, Phémina maintains the delicate alchemy of a fruitful cohabitation between photographers of both sexes …

The world of photography is still dominated by men: whether in fashion, photojournalism, nature or portraiture, women photographers have remained marginalized for too long and are still too little known to the general public. . At the same time, Women are one of the recurring subjects of photographers who constantly explore their different dimensions. Based on this observation, the principle of an exhibition that puts women and the condition of women forward seemed quite legitimate. On the one hand to highlight the many talented female photographers, on the other hand to try to illustrate the incredible diversity of women as a fascinating photographic subject.

Fabrice Milochau, landscape photographer, imagined this festival in 2015 following a voluntary shooting organized for International Women’s Day. Stimulated by this unprecedented experience for him, he planned to set up a more sustainable operation where women would be in the spotlight. It was as part of the Croisons nos Regards photographic collective that he developed this idea the following year.

“The presence of both sexes within the same festival is an important symbol of the link and the values ​​of artistic sharing that we want to highlight. This is also what distinguishes Phémina’s approach from other much more compartmentalized manifestations. »Summarizes Fabrice.

The festival has just opened its 4th edition in Fontainebleau, in the privileged setting of the village hall of the Louis XIII-style municipal theater, listed in the inventory of historical monuments. The new premises of the Royal Charity complete the installation by notably hosting the male guest of honor, Nicolas Bigot: “each year the festival highlights two guests of honor, a man and a woman, who embody the mixed concept of Phémina ”. Isabelle Chapuis is this year’s female guest, alongside more than 26 other exhibitors, out of 35 photographers in total. Because while the diversity of exhibitors is accepted and encouraged, it does not imply a logic of quotas or exact parity of participants: “it is clear that the overall quality of the applications received this year was largely in favor of women; the level and the artistic dimension of their proposals more and more clearly surpass the male files ”observes Fabrice Milochau.

With an average of 7 images per exhibitor, the Phémina festival features more than 250 photographs selected by a jury, also mixed, made up of members of the organizing collective and external personalities. For the 2020 vintage, Phémina called on the expert eye of Fabrice Héron iconographer, Stéphanie Tritz photo editor, Sylvie Hugues photo consultant and Michael Drihen director of the Fontainebleau theater.

Since 2019, the Phémina festival has also offered a reading of portfolios in collaboration with the National Association of Iconographers (ANI) in order to allow as many people as possible to submit their books to image professionals. This approach completes the program of conferences and photo workshops organized around the exhibitions.

“Our exhibitors come from all over France and we are starting to receive international applications. Casually, the festival benefits from excellent word of mouth, although we still have discreet communication ”… with an extremely small organizing team, Phémina is the very example of an authentic voluntary approach that draws its strength from proximity and human relations with exhibitors. “We quickly develop friendly relations with a lot of photographers, by the simple fact of being available and present with them in the field, of sharing meals together, of taking the time to discuss …” underlines the organizer. The 2020 edition is certainly marked by the leap of the health crisis, but the festival held firm; the imperial city of Fontainebleau, surrounded by its magnificent forest, thus happily discovers the work of many emerging artists, just like this festival which is gradually establishing itself as a new benchmark in the cultural landscape of Île de France.