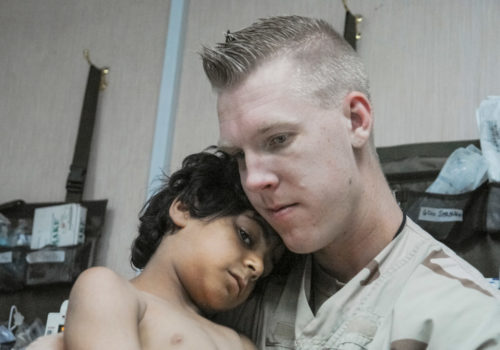 Disco Night Sept 11 is a magnificent hybrid work. Part war story and part family album, it shares with the latter the fabric cover, relatively small photographs, unfolding pages, captions, and it even achieves the same cathartic effect, for soldiers, their families, the United States and the author Peter Van Agtmael himself. A list of scenes that were witnessed but not photographed concludes his undeniably personal essay and study that includes a photograph of a misty Swedish forest which Van Agtmael visited, somber and confused, after his first trip to Iraq.

“Disco Night Sept 11” reads a sign outside an American motel. This is the irony of a conflict that has changed its appearance since September 11th, 2001, and whose consequences are still being felt. It’s also the date to which Peter Van Agtmael, then a student in modern history at Yale, anchored his obsession with 21st-century American wars. Viewing photography as a way to understand them, he spent several years covering the wars in Iraq and Afghanistan for the international press, in the field and from the United States, with a complex vocabulary rejecting immediacy—one of the strengths of the book is the way its texts stop the reader, drawing out one’s exposure to the image, allowing its various scenes to unfold. First we see two men in their thirties chatting in a hotel hallways, then we realize that one of them is missing an arm. First we see a sculpture, then we see the figure of a screaming woman, her hair on fire, her hands clasped over her mouth in pain. First we see a soldier posing before rubble, then we see the gallons of blood splattered against the walls, a shoe on the end of his rifle, and a disturbing grin on his lips. “It had been an unusually violent day mixing absurdity with danger,” writes Van Agtmael later about the overwhelming reality of this modern war whose mechanisms, codes and iconography he has continuously dissect and deconstruct.

Disco Night Sept 11 offers memories of the dead to families, meaning to traumatized soldiers, and to the United States, mourning over a painful mistake that seems only to have spared the town of Nineveh, in Iraq. In the bible, Nineveh was spared by God, reads the caption. In 2009 in Nineveh, far from the consequences of some international dichotomy, American soldiers struggle to ride donkeys, to the amusement of onlooking Iraqis who have never seen an American patrol. Van Agtmael rejects the notion of the enemy for that of the individual in order to write a total history, as offered by the Annales School. The protagonists come together, first in the words of Van Agtmael and the soldiers, written on the walls of bases and camps and torn sheets of paper. The first piece of graffiti reproduced in the book reads, “Second Tour: Hope I Don’t Die,” and it was for a long time the name Van Agtmael had given to the series, but it could also appear in a bubble above the face of Brian Cowdey, surrounded by his family and lost—Cowdey was killed during his fourth deployment to Afghanistan, we learn in the caption. The voices blend together, visually and textually: Iraqis, Afghans, soldiers, provocative, tender, moved, frightened, weakened, reasonable, enraged, drugged, sensitive and dead, their families, President Obama, the media, the photographer and son of worried parents.

“By the end of my time there, that adrenaline had been taken over by sadness and unease and I would collapse on the bed and fall into dreamless sleep.” Through Van Agtmael’s anachronistic words, overlapping different periods of times, we hear the voice of people damaged by the war, trembling with rage and fear, when they do not directly speak: “Get that fucking camera out of my face “, bursts in a last breath a soldier who was burned at 90% and was slicking with pain on his hospital bed. The intrusive device is not that of Van Agtmael but that of a photographer responding to an automated iconography of conflict. The prospect of Van Agtmael is wider. It includes, at the extreme left of the image, the disapproving look of a soldier accompanying his deadly injured friend. Hospitals are a special place in history : they are the expression of the physical and psychological wounds , the place where the War Manichaeism  does not apply, where its cruelty is the most visible. They are also the place that marks the transition to another phase of the war: the war after the field, which is often as painful. Van Agtmael combines graphic images of injuries – gory or cold as the images used as evidence for forensic – and tender shots of soldiers posing in turn with a small Iraqi girl in their arms. The hospital becomes the place of unformulated repentance.
The same applies to the field and the daily life back home. To the explosions, amputees, injuries, tears and cries, Van Agtmael added photographs imbued with fiction, with some shot featuring a cinematographic aesthetics – there is a futuristic and romantic photograph of a night flight over the United States, and another photograph could be a movie poster titled “Soldiers and a Reporter”, with a woman in a short and colorful skirt in the role of the reporter, bathed in light and exposed to the history the same way his bright red hair shine in the middle of camouflage patterns. Van Agtmael uses the various genre to reach the real depth of the war. He inserts mundane scenes – of relaxation, dilettante, daily baths, midnight swims – while other photographs look like studies of landscape in the quasi- monochromatic territories where unfolds the first chapter of the war, where the ruffed ears of wheat waving in the wind draw in the sky brown streaks that we take for missiles.  Van Agtmael’s photographs operate at the same pace as the war. We can not escape their violence because it does not come out only in an explicit expression. What is of a rare violence, in gun fight with the Taliban in Mian Poshteh, Afghanistan, is not the bloodbath that ensued but the aftermath portrait of a Marine in a corn field, frozen in shock – a shock that we know as indelible.
The book ends in a slow visual epilogue introduced by Major Robert Camberlain, which describes the U.S. as “… a land of incredible tensions and contradictions”, but also “the space for humanity to achieve its best.” Peter Van Agtmael covers the upper third of an immaculate cemetery with the fabric of an umbrella and drops curtain – the blue curtain of peace, with Bobby and his unwavering humor as an optimistic and squeaky spokesman. Bobby was burned and disfigured by an explosion. It has become the leitmotif of his new job: comedian. “On July 4, I always go to a fireworks stand. I get all excited and I ask them: “Can you give me the same thing last year? It was great.” He blows away the doubt planted in the middle of the book by a menacing graffiti reading: “Only the dead have seen the end of war.”