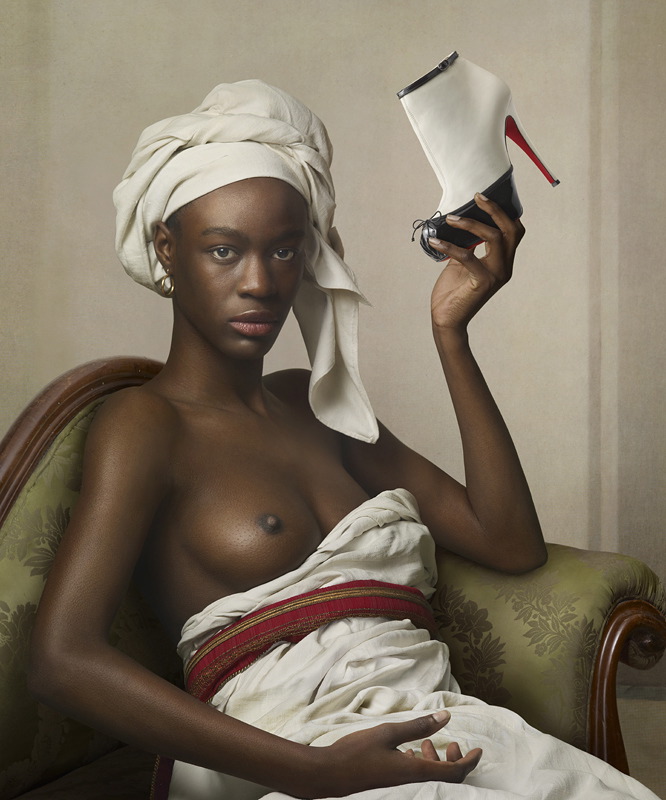 The idea was ambitious, even risky. The series also marks the first time that clothing and people entered Louboutin’s visual universe. The question was: should they be reproductions of classical works, or reinterpretations? Peter Lippmann decided to reinterpret them in a highly modern and photographic way. They rose to the challenge, with an elaborate preparation of casting, decor and lighting; Lippmann and Louboutin made sure no detail went overlooked. The result is faithful to the spirit of the original works, while the shoes blend in seamlessly without perverting, vulgarizing or discrediting them.

Les Promises de l’Hiver is a brilliant example of an aesthetic anachronism and a confusion of styles: classical painting meets commercial lookbook. The photographs were so exquisitely executed that Peter Lippmann was awarded 1st prize in the Association of Photographers’ Publicity category in London, and 1st prize in the fashion category at the International Photography Awards in Los Angeles. The series was also an artistic success: they are now part of the Galerie Sophie Maree’s catalogue in The Hague.

Lippmann had already undertaken several assignment for Louboutin, including one campaign in 2009 also taking inspiration from classic painting, where the shoes were made into memento mori.

Having photographed still lifes for more than 30 years, and always fascinated by the great still life painters like Cézanne, Lippmann initially specialized in food photography. He began shooting for the magazine Cartier Art ten years ago, then later with the magazine Marie Claire 2. He began to branch out into include jewelry and footwear, which allowed him to “imagine worlds without limit” and expand his creative universe.

The second series presented here is also an assignment for Marie Claire 2, in which grapes decompose next to precious jewels. This sublime mis en scène garnered Lippmann Communication Arts’ annual prize for best photography. A similar series (minus the jewelry) will be the subject of a forthcoming book.

Persuaded that she will “take back what’s hers,” nature is a great source of inspiration for Peter Lipmmann. Whether in his personal or commercial work, Lippmann’s photographs are raw, rich, noble, unconstrained, and always marked by the power and splendor of the supremacy of Mother Nature.

Founder, writer and singer of the group Lobotonics, Peter Lippmann invites you to attend his acoustic rock concert December 9 at 20h30 at the bar Le Tempo, 18 rue Brochant, Paris!