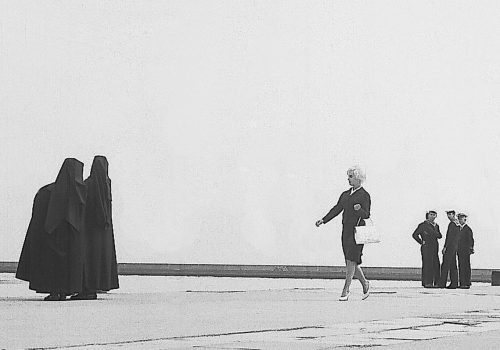 Péter Korniss, born in Cluj-Napoca, Romania in 1937, is one of the most highly regarded contemporary Hungarian photographers. Throughout his more than fifty-year career Korniss has used the tools of documentary photography to create compelling, authentic portraits of traditional cultures primarily in Transylvania and Hungary, but also in Slovakia, Serbia, Siberia, South Yemen, and beyond––including on the Navajo and Oglala Sioux Reservations in the western United States. His recent color work explores the impact of globalization.

The show at the Hungarian National Gallery presents over 150 images from every stage of Korniss’s career. His early images from the 1960s and 70s, when he began to document folk culture in Transylvania, capture in the words of critic, Miklós Almási, “the new continuity of old customs” and preserve a now nearly-vanished way of life. Many of his photographs depict generations of the same families that he befriended decades ago. These images provide a fascinating and unique record of social change.

In his most famous series, The Guest Worker, Korniss followed András Skarbit over the course of ten years in the 1970s and ‘80s as he commuted weekly from his home in the village of Tiszaeszlár in eastern Hungary to his job with the Metropolitan Gas Company in Budapest. We see Skarbit fully engaged in the world of his family and village, with his colleagues working in the trenches, eating and sleeping in their shared trailer––and ultimately as a man with a foot in both worlds, not completely a part of either. In an image from 2017, we see the family home, now abandoned. Skarbit died in 1999, and his wife in 2013. His daughters, now grown, married, and living elsewhere, will never return to the village.

In Town shows peasant women coming to the city in their traditional clothing to look for work, to sell their folk art on the street or in the subway, or to care for well-to-do, elderly, urban dwellers in modern apartments. The Nativity depicts the re-enactment of a traditional, village Christmas custom, the Nativity play, in the middle of the city. These recent, staged, color portraits are remarkably fresh and reveal in stark, jarring detail the traditional bumping up against the new.

On another hand, the show at the Várfok Galéria also shows a variety of images and series from different stages of Korniss’s career, including the beautiful and much-beloved Story of the Girl Turning the Hay, in which his early training photographing ballet dancers is evident; his never-before-exhibited photographs taken on the Navajo Reservation in the 1970s; and a recent, color series, The Women of Sic.

Joanna Hurley is a book agent and packager based in Santa Fe, New Mexico, USA.