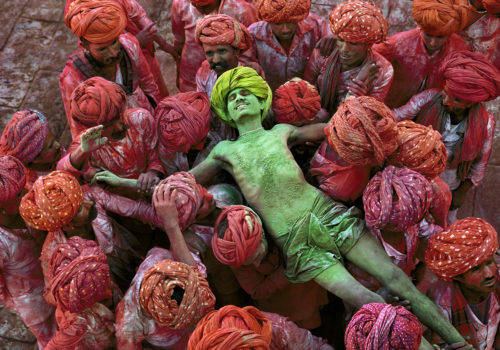 Peter Fetterman Gallery presents the exhibition “The World of Steve McCurry”.
Steve McCurry is universally recognized as one of today’s finest image-makers and has won many of photography’s top awards. Best known for his evocative color photography, McCurry captures the essence of human struggle and joy. As a member of Magnum Photos since 1986, he has sought and found the unforgettable; many of his images have become modern icons, his most popular photograph of the unidentified Afghan refugee girl with the striking green eyes. Born in Philadelphia, McCurry graduated cum laude from the College of Arts and Architecture at the Pennsylvania State University. After working at a newspaper for two years, he left for India to freelance.

It was in India that McCurry learned to watch and wait on life. “If you wait,” he realized, “people will forget your camera and the soul will drift up into view.” His career was launched when he disguised in native garb and crossed the Pakistan border into rebel-controlled Afghanistan just before the Russian invasion. When he emerged, he had rolls of film sewn into his clothes and images that would be published around the world which were among the first to show the conflict there. His coverage won the Robert Capa Gold Medal for Best Photographic Reporting from Abroad, an award dedicated to photographers exhibiting exceptional courage and enterprise.

Steve McCurry has covered many areas of international and civil conflict, including Burma, Sri Lanka, Beirut, Cambodia, the Philippines, the Gulf War, the former Yugoslavia, and continuing coverage of Afghanistan and Tibet. He focuses on the human consequences of war, not only showing what war impresses on the landscape, but rather, on the human face.