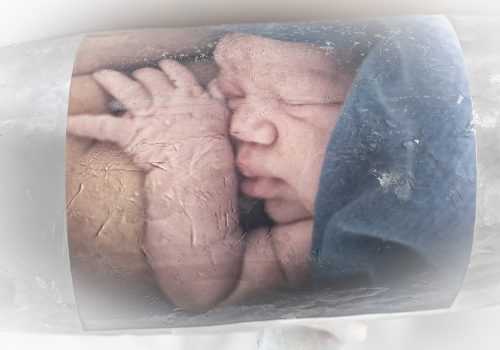 In Utero is about these times.

It looks at the incredible and terrifying confinement that the world is experiencing.

Not being able to go out to photograph, I turn my eyes inside.

First into my own home and to my family. A path that finds me inside myself. When I notice it, it had already been there.

It is autobiographical, as it could not be otherwise.

The strange sensation of waking up to a cinematic dystopia.

A real movie script where I am one of the characters. There are no good guys to save us in the end, not least because we don’t know if there will be an end.

An anguish that gradually erodes the dreams that were being built prior to event.

A reality of poses and fictional successes that each person embodied – buckled.

Stripped of the control we thought we had of our lives, I dive with everyone, in an ocean of uncertainty and pain.

Each piece of ice that melts is like a teardrop that flows for everyone who has not been saved, for each family that has lost part of itself.

It is no longer possible to walk calmly through the old idea of life, consumption, possessions.

It seems that the world has hit the pause button. The feeling that we freeze life at some point to thaw ahead, in a new situation where we don’t know how it will be, or when it will be.

I took all my good emotions from my family. Ones occasionally frozen in photos, and frozen redundantly. It was like taking my feelings and pausing them for a while. Never has the mushy phrase “photographing is eternalizing a moment” made so much sense.

I wanted to protect the scenes that already existed in a place I felt they would be safe, so they would not lose their essence and not cease to exist. My emotions on those occasions would be protected from what is happening.

And of these dense emotions, I chose the last phase of my life, as it was the most intense of all.

My love of a woman, who became a third and fourth person. Love that materialized like Giovanna and Valentina. And on all fours, we became one.

Thus, the pregnancy so intensely experienced by us, took on a heavenly air in involuntary cracks in the ice. The baby photographed just minutes after birth appears to have returned to the womb in an ice capsule. We all return to the womb of life.

With each freeze, the surprise of the uncontrollable behavior of the water that solidifies with its cracks and natural bubbles.

We are stationed here, protecting ourselves from the invisible, perplexed by an unimaginable situation.

Although the photos show situations of affection in the family, the ice imposes a natural melancholy. It involuntarily causes some scenes to resemble paintings, which clearly make up my personal cultural repertoire.

In Utero opens up my cauldron of confused and anxious feelings, eager to want a normality to return. One that may no longer exist. – Paulo Henrique Pampolin