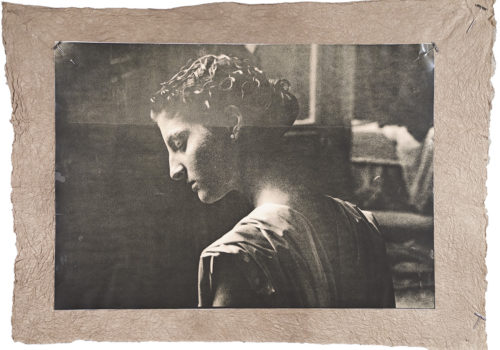 The MUUS Collection presents the exhibition of Deborah Turbeville’s never-before-seen Passport, a 1990s body of unique photo-collages. This exhibition features a selection of prints from the 120-page artwork of the same name. Passport is curated by Nathalie Herschdorfer, director of the Museum of Fine Arts Le Locle, Switzerland, and curator of Elles x Paris Photo. The exhibition is the Paris Photo-debut of MUUS Collection, which recently acquired the Turbeville archive. A video installation features the entirety of Passport as well as an introduction to the MUUS facilities.

The pages of Passport showcase works created throughout Turbeville’s fruitful career and are brought together by the artist in this portfolio. In its sequencing, the narrative of Passport is evocative of cinema, reading as both a fictional story and a personal statement relating to the artist’s life, her relationships, and her career in the fashion industry. As with Turbeville’s entire oeuvre, the imagery of Passport resonates with an eerie, timeless melancholy, and a patina that imbues it with the distance of a haunting memory.

By unveiling Passport, MUUS introduces Turbeville as a prolific artist who produced idiosyncratic artworks with a unique signature style. From the 1970s and over a period of 40 years, she created works not only with her camera, but also while revisiting her own archives — manipulating, tearing, scratching, pinning, taping and gluing her negatives and prints with her own handwriting and printed text. Passport is as much a portfolio bringing together the best of Turbeville’s work as it is a cinematographic narrative sequence that can be read as the artist’s biography.

Often reduced to the narrow label of fashion photographer, Turbeville is poised, with this reappraisal of her work, to take her rightful place within the pantheon of 20th century photographers.

Deborah Turbeville (1932-2013) was an American artist who made her mark on fashion photography in the 1970s and then developed a personal work that is unlike any other – mysterious and timeless photographs as if from another era – imposing her vision even in commissioned work. Born in 1932, Turbeville moved to New York following her schooling, where she became an assistant and house model to designer Claire McCardell. After being introduced to Diana Vreeland, Turbeville was eventually offered a job as an editor at Harper’s Bazaar. It was not until the 1960s that she purchased a Pentax camera and enrolled in a workshop taught by Richard Avedon and art director Marvin Israel. She then began her  photography career, primarily working for major fashion magazines, though she didn’t consider herself a fashion photographer. Revealed in 1975 by Alexander Liberman, famous Vogue’s artistic director, Turbeville became one of the most revered fashion photographers working during the 1970s and the 1980s. Working between New York, Mexico, Paris and St. Petersburg in Russia, she published eleven books in her lifetime among them Unseen Versailles (1981), commissioned by Jaqueline Onassis Kennedy, winning an American Book Award. Turbeville died in 2013 having taken part in numerous exhibitions throughout the world, and forged a successful career beyond the field of fashion.

The MUUS Collection brings together photographic works that mark major turning points in American history with the belief in the unique power of photography as an inimitable touchstone of collective cultural memory. The collection is comprised of more than 500,000 images of 20th century American photography. The MUUS Collection builds, preserves, studies, and shares its archives of American photography, generating new scholarship and understanding, while creating new relevant dialogues within the wider photography community.