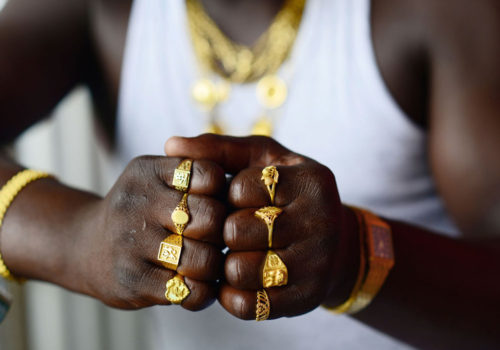 The Saamaka, Ndyuka, Aluku (Boni), Paamaka, Matawai et Kwinti, all equally known as Businenge, are maroons communities living since the 18th century in a territory crossing the artificial border traced by colonial powers between Suriname (former Dutch Guiana) and French Guiana. Their existence brings discontinuities and ruptures in the history of slavery and of post-colonialism and questions the periodicity and spatiality of their hegemonic narratives.

In 18th century Dutch Guiana, marooning was common. Escaping plantations, slaves gathered in the forests and created new societies in tough conditions of survival. They had to defend themselves against armed troops sent to wage a merciless war. By their mere existence, maroons were defying colonial order and the system of slavery. To impose its law, the later punished captured maroons with all its cruelty, torturing and killing them in public. Yet, despite repression, Maroon communities imposed their sovereignty to colonial powers. The first treaty was signed in 1760.

As Sally and Richard Price have shown, their art emerged from an inter-African syncretism and from transformations and evolutions peculiar to their communities, demonstrating a capacity to “combine and extrapolate African ideas and to creatively adapt them to changeable circumstances.”

This aesthetic of plasticity is threatened today by tourism and folklore. The gold mining economy, the artificial division of their ancestral territory, and the denial of their rights as autochthonous peoples have amplified disparities and conflicts.

Confronted to a global economy that favors profit and that appropriates their lands, the Businenge continue however to preserve and defend their rights. They like reminding that they never surrendered, that they never broke with their origins and that they never embraced the values of the Creole assimilated society.

The photos of Nicola Lo Calzo, a contribution to the library of post-colonial visual arts, show the living expressions of Afro-American cultures, which mix memory and creation.

“This world of wild vegetation and waters is an ideal setting into which beings can dissolve. As if fearing that history might repeat itself, they seem ready to weigh anchor at any moment and set off for a new somewhere else. The river is there, endless. Here, Lo Calzo makes Maroon photography. That is to say, he joins a brotherly underworld that allows him to fade into the surroundings and capture the quintessence of that which is not visible to all. He has found a way to give subtle movement to this frozen time”.