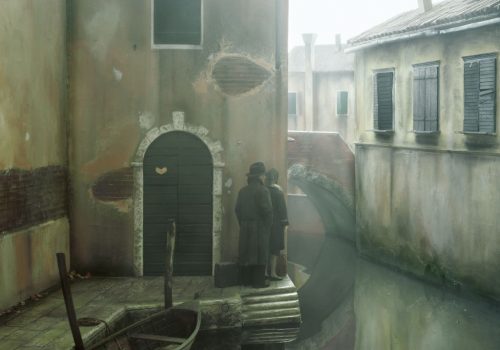 More than a hundred of immersive and surreal stories and photos by Paolo Ventura, collected in Racconti Immaginari/Imaginary Tales, are on stage at Armani/Silos in Milan..

Ventura adopts unusual pictorial perspectives suggesting enigmatic worlds beyond reality and an unconventional chromatic palette that pair nicely with the refined spaces of the Armani/Silos and the new look of the area displaying themes and fashion creations by Giorgio Armani.

Giorgio Armani, attracted by this unusual dimension of reality, says he has been “fascinated by the narrative power of Ventura’s works and by his ability to transform evocative, imaginary landscapes into photographs”.

The Eye of Photography interviews Paolo Ventura on his work.

What are the influence of stories on your work?

Images are stories. Including the tales my father told me. Since he used to be a children’s books illustrator, his stories were fascinating and engaging. I adapted one of them for The Automaton series, that takes place during the 1943 evacuation of the Venice ghetto, when an automaton created by an old watchmaker, at some point shows an almost human-like behaviour.

Venice is a fascinating framework for The Automaton. How did you re-create it?

My Venice was all contained within a table in my photo studio: a miniature set, with small characters, puppets, animating this mini-world. It’s a real place, for I was there taking pictures in its alleys, in a never-never land: a city familiar and unknown at the same time, with a touch of subtle melancholy. And like every fairy tale, the snow there is made of sugar. I love The Automaton because it requires people to engage themselves with a surreal imagery. Like most of my works, it looks nice and attractive, but in fact it’s a trick, for there is deep stuff inside.

Short Stories and other works of yours, like Il Funerale di un anarchico, features real people. Why?

It’s a multiple replica of myself. At the beginning I had puppets as main characters of my stories, until I discovered it was a safe world and I started performing myself. I feel a lot the theme of the double, because “I” have a double: my identical twin brother. Indeed it’s still me featuring all the 350 soldiers in Un Reggimento napoleonico va sotto la neve.

You are a well-known fashion photographer but your images in Racconti Immaginari are something different.

I was working in a fascinating world, but at some point I asked myself what I really wanted. I realized I had stories to tell and the ambition to narrate them. I went to New York. In my studio I began to build and photograph small dioramas about World War II in Italy: Contrasto published War Souvenirs. My second major project, Winter Stories, was published by Aperture. My father was an illustrator and my two brothers painters, so I compared my condition as a photographer with their own. I was walking around en plein air with a camera in my hands, while they could model their creative freedom in a studio. Then I realized the camera could make credible what wasn’t real. And I started telling stories made of paper.

Your series La Città infinita seems to get along with randomness and modularity. Would you give us some details?

Some of my stories are connected to the Italian literature, for instance to the novel Le Città invisibili by Italo Calvino. Indeed, in my series La Città infinita, thanks to the unlimited combinations of its parts, my town can be carried on ad infinitum. I’ve always loved the city, I like the place where it ends because the buildings are easy to discern. I like the city outside its walls running away as though liberated. As a child I thought it was infinite. My city is dismantled piece by piece and rebuilt in another way, reversing the order of the pieces. In my works there are also hints from the new German objectivity and the cinema by Visconti: the result is an interesting alchemical combination. I complement painting and photography in the same work: I don’t think about them as separate things, because photography has freed itself of the duty to be a witness of time and reality. So I use them with the highest level of freedom.