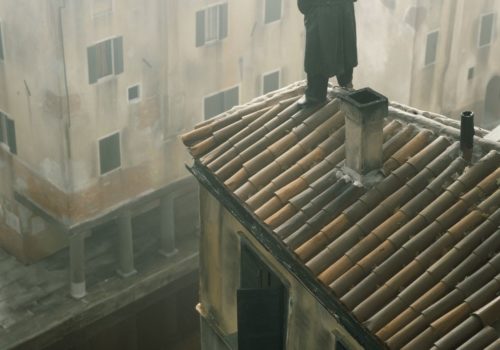 Carousel, on stage at CAMERA in Turin, suggests a journey through the works by Paolo Ventura spanning his whole eclectic career. He used to be a fashion photographer when in the early 2000s moved to New York. Ever since his early works, Ventura mixed manual skill with a poetic vision of the world in order to create sets for short surreal stories to be captured by the camera.

War Souvenir (2005), for instance, was a re-elaboration of the atmospheres of the First World War (small theatre sets and puppets). Since he’s been back in Italy he has been working on many innovative projects mixing photography, painting, sculpture and theatre, like the scenography for I Pagliacci by Ruggero Leoncavallo, a collaboration with the Teatro Regio of Turin (CAMERA exhibited some preparatory works in 2017).

Then, clowns, wizards, jugglers, soldiers, costumes and disguises. A characteristic they all share are the costumes, that in a way, annul identities and belong to a timeless dimension. “They allow me to play the roles of individuals and to interpret them. (…)”,  says Paolo Ventura. The soldier, for instance, is a classic character in the stories: he is forced to leave his individuality to wear a uniform, entering in a different and alienating social dimension, the one of war. And war is another fil-rouge in his research, that moves between the falsehood and truth of photography and touches on themes such as the concepts of double and fiction.

CAMERA is hosting some of Ventura’s evocative works chiselled in a significative combination of languages (drawings, models, sets, papier-mâché masks and theatrical costumes …). The exhibition path offers a staging of the recurring themes of his poetics as well as new projects: Grazia Ricevuta and the La gamba ritrovata (The Newfound Leg) Paolo Ventura is carrying out following a residency at the Istituto Centrale per il Catalogo e la Documentazione – ICCD in Rome, originated from the collaboration between CAMERA and the Ministry of Cultural Heritage and Activities and Tourism. Ventura found out that within the huge ICCD archive of 1800s photography there is a lack of images of war. So, Ventura, always between reality and imagination, decided to fill the void with a bluff, creating a series of photographic prints on salted paper representing scenes of battle related to the Italian Risorgimento (1848), made by the Laboratorio Fotografico dell’ICCD using the 19th century tools and proceedings. As for the title, there is another story: in the ‘90s Ventura shot a photo of the skeleton of a leg found by a farmer near the Montebello War Ossuary. It wasn’t long after that he stumbled onto the photo of an officer without a leg. Hence the idea: making visible (thanks to an original mise-en-scène) the soldiers who had fallen and that what at the time nobody wanted.

On stage, also previously unseen works belonging to the series War and Flowers, which the artist has been working on over the last few weeks: it’s a pictorial work, that combines war relics and the delicacy of wildflowers, as a counterpoint to the tragedy of war. War and Flowers also seems to be a reference to the series W.W.I (1994): in a way, the two series constitutes the temporal and linguistic outermost points of his work. At least for now.

The exhibition, curated by Walter Guadagnini with the collaboration of Monica Poggi, is accompanied by the monograph Paolo Ventura. Photographs and Drawings (Silvana editoriale) tracing 15 years of Ventura’s activity and offering an original interpretation of staged photography.