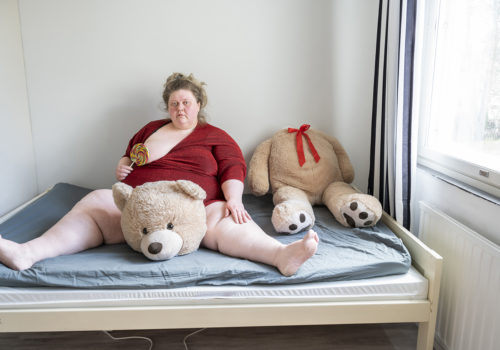 Nino Mier Gallery  presents Women’s Work, an exhibition of photographs and videos by Finnish artist IIU SUSIRAJA.  Susiraja is known for her still and moving image portraits, which capture the artist in her own home or her parents’ home, interacting with items such as  housekeeping tools and pantry staples with prurient, deadpan humor.  In Women’s Work, which will be on view from February 18 – March 19, 2022 in Los Angeles, Susiraja brings a sense of irreverent, macabre irony to the type of labor which extracts value from the display of women’s bodies.

The photographs and videos in Women’s Work share what Hal Foster calls an anti-aesthetic, or the denial of an essentialist understanding of classical beauty and its delectation.  Composition and light are not so precious to Susiraja, who favors photographs that surprise and disturb, rather than those that placate with their meticulous tableaux.  Her work seeks to capture something felt, but is as yet inarticulable, about feminine performance and self-presentation.  In an interview with Paula Korte, Susiraja noted “I don’t actually do much consciously at all, other than list objects on paper and go and fetch them.  The end result is a momentary dash that ends up on the camera screen.  I don’t deliberately think that I want to achieve a specific mood in any given picture: if the mood doesn’t come, then it doesn’t.  Taking a picture is spontaneous, trusting in the moment.”  This aesthetic of the haphazard—of the unrehearsed and unrestrained—saturates her images with an energetic impudence, amplified by Susiraja’s captured gestures.

Within her works, Susiraja dirties herself with food, lets her bare skin bulge and fold, and leaves her hair unkempt.  She places some objects in and around her genitals—a turkey in front of her groin in Snooker, a buttered baguette sticking out from between her legs in Baguette—and others pressed against her breasts—plungers in Road Trip, a lollipop in Zoo.  By approaching the habits and wears of domestic life so lewdly, she renders the actions and materials that make up daily rituals perverse.  Amidst these gestures, Susiraja maintains a flat affect, as though bored by the demands placed upon her body, her habits, and her surroundings by the many cultural forces that push us to self-optimize.  “I try to reach as blank a state as possible.  I try to not have any facial expression […] For me, being blank is the same as being real,” Susiraja has disclosed.  Her claim to the truth-value of her expressionless face, coupled with her typical front-facing composition, recalls the visual mode of 19th and 20th century ethnographic photography, which sought to display the “strange” and “exotic” appearances of colonized peoples to European subjects.  Susiraja follows in a long tradition of modern and contemporary art photographers, from Rineke Dijkstra to Diane Arbus, that take on the lexicon of such photography, only to scramble its significance.  In Susiraja’s self-portraiture, the binary of self and other, beholder and viewed object is troubled.  One is either in on Susiraja’s joke, or is the butt of it.  As critic Alex Jovanavich put it in Artforum’s February 2022 issue, “by seeming to humiliate herself, she pointedly calls out those who cling to cruel misperceptions about the obese—that they’re stupid, lethargic, gluttonous, etc.—by exaggerating such notions to preposterous degrees.

In photographs such as Blue lagoon and Zoo, Susiraja splays out, partially naked on a bed, covered by items like a decapitated, oversized teddy bear and Santa masks including beards and hats.  These photographs are representative of the artist’s signature double-trick: first, she unlocks the power of lecherous innuendo in these otherwise innocuous objects, and second, she brings the seduction into the realm of ordinary doldrums — that is, of work — as though she were playing a Jeanne Dielman directed by John Waters.