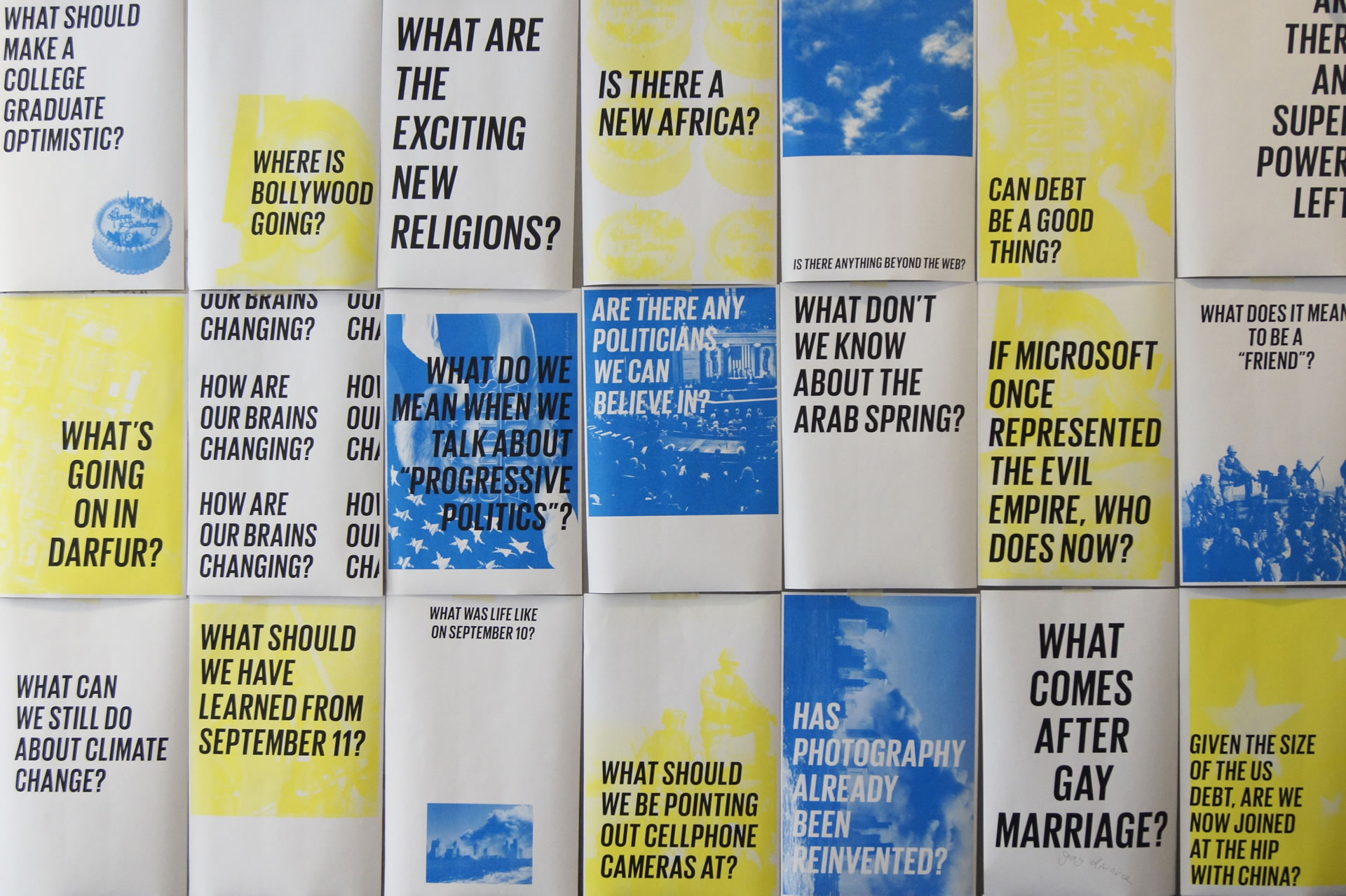 Fred Ritchin is professor of Photography at New York University’s Tisch School of the Arts, author of After Photography, former editor of the New York Times magazine and founder of the photojournalism program at ICP (International Center of Photography). Confronted with the concern of seeing press photography lose its objectivity and turn into hyper-consumerism, he organized an exhibition and conferences on: What matters now? Proposals for a new front page. The question: what kind of selection of images should we envision today in order to have a fair understanding of the world around us and its challenges?

The answer to this common “Front page” is to offer the white walls of the space to the participants in order for them to show the images they believe to be important and to talk about them, face to face. This sort of “philosophy café” moment, that puts some perspective on internet’s cyberspace, welcomed over the course of ten days dozens of people at the Aperture Foundation gallery in New York. The result is displayed in the foundation until September 24th, leaving each one to reflect. In the long run, Fred Ritchin hopes to build a community that is able to filter, within a need for diversity, the important images. “A Facebook about the world, not only about friends.”

The current visual world is made of millions of images in transit, and disseminated by an innumerable number of platforms, physical or virtual. The reader might lose some hindsight confronting such an ample phenomenon. What does the project featured in the Aperture gallery mean?

Fred Ritchin : It’s a possible strategy in answer to the passivity that people have embraced confronting the amount of images that they receive. Nowadays, many Americans don’t trust the newspapers anymore, which are not handling in hierarchy the priorities of the world. At the time of the Vietnam war, we’ve all seen the same strong images by Eddie Adams or the other photographers on the fields. We were forced to talk about them in the places where we would meet and react. Today, for the commemorations of 9-11, many people do not know all of the important images from that day. Tim Hetherington and Chris Hondros were killed this past April in Libya and most of my students do not know their work. It is precisely because there is no longer a “Front Page” where everybody can see the same pictures. We owe it to the witnesses working for us. If no one pays attention to what they produce, everything will become virtual. It’s the trend, we no longer react, we fall into the easy way. My idea is to bring the citizen to his responsibilities, to avoid him gulping endless images from cyberspace but to talk about them in a particular place.

So, you are proposing to gather important images and discuss them here, at Aperture, but also on a web platform…

Fred Ritchin : Yes, that’s what’s been happening over the first ten days that have helped to set up the exhibition. The walls were empty and have been filled with images that have been part of our conversations. Huxley said: “If there is too much to know, we learn nothing.” There are over 60 million images on Facebook. Even living ten lives, I would never be able to see them all. In Egypt, we saw millions of images circulating on the social networks, and we congratulated these initiatives. However, I would’ve loved to have had a summary of all the images to look at, within around fifty photographs, what was essential to know. That is what happens in a café, that is what we have captured with the café at Aperture. It is our “Front Page”.

Do you think that the world has become too passive with images?

Fred Ritchin : Yes. There are too many facts, we do not try anything anymore, we don’t react. It is easy to become cynical watching the tragedies that the world is experiencing these days.

Is it a generational problem due to the explosion of virtual spaces of communication? Have we lost a physical contact with the world?

Fred Ritchin : Yes, it’s true. Today there were around 60 students who we asked to look images of current events and then tell us what they thought about them. I had the impression that it was the first time in their lives where they could take part in an exchange, face to face, on these photographs or on important issues. Today we find in cafés a certain amount of people sitting at their tables, in front of their laptops, but whose presence is only virtual. That is scary: it’s the open door to rumors, the absence of reasoning or conscience, the ignorance of the suffering cultures. Yesterday I watched Blade Runner and I thought: “It’s funny, our society today seems a lot like the one portrayed in the film.”

Do you also criticize the amount of pictures being produced?

Fred Ritchin : Not necessarily. It’s more a question of loosing your objectivity, even if I don’t like the word. In the last ten years, I have only seen photo reportages in Afghanistan showing soldiers, battles, people who died. I would have wanted a wider range of images, also showing the everyday life or the culture of that country. Simon Norfolk said here that “the photographers in Afghanistan just show the same images and hardly know the history of the country.” We can also talk of manipulation, or of a war of images. In Arles, a Tunisian man explained to me that the produced images were a way to win the revolution. That surpasses the testimony, the precise goal that subordinates the role of an image, that is to say, the information.

That is why in the round table, you have emphasized the portrait of Asha, the Nigerian artist who opposes the images of famine that we are used to seeing when we talk about this country?

Fred Ritchin : Yes. People have gotten used to stereotypes and forget the rest. In the United States, people have a tendency to think that they are superior, considering come cultures as victims. That is what is shown in the newspapers. But we do not realize that today this country is in deep shit. It is really sad to know what is going on. Everybody is watching so many things, but in reality, they don’t see anything. We are not really citizens now, we are just consumer spectators of images.

Interview by Jonas Cuénin
Translated from the French