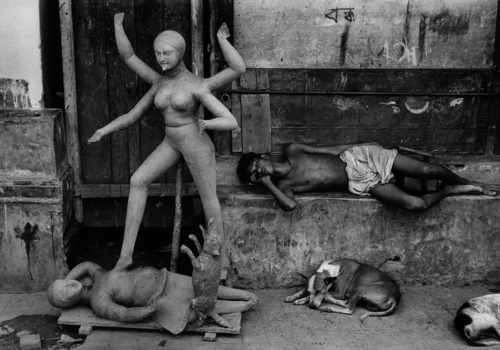 The exhibition devoted to the photographer Marc Riboud (1923-2016) celebrates the entrance of his entire oeuvre in the national collections, according to his wishes. An outstanding figure in photography, Marc Riboud left his hallmark on the second half of the 20th century with his deeply personal vision of the world. A photographer more than a reporter, he left us over 50 000 photographs (negatives, transparencies, and prints) in which Asia plays the leading role. Who among us does not identify with this or that picture we have always known and thus does not have the impression that leafing through the album of the world is like looking at our own family’s album? From right after the war to the timeless China of the Huangshan mountains, a journey of over fifty years on every continent, with a privileged place for Asia, is offered to us with this retrospective exhibition of Marc Riboud’s work.

Marc Riboud did his first reporting jobs outside of France on the recommendation of Robert Capa and Henri Cartier-Bresson, founders of the Magnum photos agency that he joined in 1953, and then left in 1979 while keeping  a friendly relationship.

He took his first steps in post-war France and England, immediately creating images that live in our collective imagination, including the famous Eiffel Tower Painter, iconic images of Paris, or again one of the last portraits of Winston Churchill. Then came the journey through Eastern Europe. After Yugoslavia – geopolitics of another century -, and the working class in England (1953-1954), his first trip towards the Islamic East began in 1955 with Turkey before setting off for Asia by car. After a three-years journey that took him all the way to Japan, the great revelation of his life as a photographer was China, hitherto almost inaccessible. He would travel there many times in his lifetime. From his long stays in Southeast Asia, China, Japan, Afghanistan, India, Nepal, he brought back essential images, seizing a continent in the midst of change, through images characterised by a strict geometry and a profound sensibility. Remote from any form of sensationalism, his eye embraces humanity in its universality as in the vortex of the great upheavals that punctuated the history of the second half of the 20th century.

A major retrospective spanning the entire work of the photographer who died in 2016, the exhibition highlights the course of a lifetime, from his early photographs taken in Lyon – the city of his childhood – and post-war France, up to the last ones in China, notably in the Huangshan mountains. The photographer Sarah Moon accompanied him with an entirely different eye, offering a striking counterpoint to Marc Riboud.

Never neglecting the art of composition, he crafted a work that expresses a deep sensitivity to the human being, in its solitude as in its collective adventures. Throughout his lifework he seized powerful images of crowds. Then came the rest of the world: Alaska, the Maghreb, and Africa – in the days of the independences -, Cuba, the United States. It was in Washington in 1967 that he photographed the Girl with a Flower, that became a manifesto image against the Vietnam war that toured the world.

The last part of the exhibition is devoted to Asia: there history with its torments had to be documented. Whether in Vietnam, Bangladesh, or Cambodia, Marc Riboud handled it with dignity, producing restrained, overwhelming, and universal images. Last, China is told in black and white and also in colour. Marc Riboud returned regularly to seek the testimonies of the evolutions and paradoxes of a political regime that led its society to sweeping changes. In the Anhui region he seized the impalpable essence of the beauty of the sugar-loaf shaped peaks laden with scarves of mist, clouds, and soaring pines. By thus approaching the sensitivity of a scholar he offered a modern interpretation of ink wash drawing.