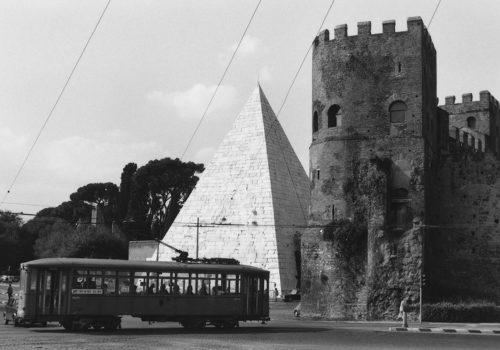 The Musée Granet presents from April 29 to August 28, 2022, an exhibition dedicated to the photographic work of the artist Bernard Plossu (1945-) on Italy.

Granet and Plossu have the same passion for Rome and for Italy.

A hundred photographs will be exhibited, most of them unpublished, covering the period from the end of the seventies to 2017.

Although the artist is famous for his photographs using black and white almost exclusively since 1965, he was able to experiment with color during his travels through a particular pigmentary process, the Fresson print, discovered in 1967. These matte charcoal prints known around the world, give his photographs a faded, grainy, soft and almost powdery rendering. Thus, the exhibition will present around twenty Fresson prints, almost never shown.

This magnificent set will be set against around sixty wash drawings, watercolors and drawings of different views of Rome and its surroundings produced by the emblematic painter of the city of Aix, François-Marius Granet (1775-1849) from the first half of the 19th century.

The two artists indeed share The same favorite subjects, the same interest for the Eternal City and Italy, for its alleys steeped in history, culture, memory, these landscapes suspended in time, urban or natural, imprinted with loneliness. The treatment of light, shadows through chiaroscuro washes for the painter, and by silver photography for the photographer, the framing, the patterns, everything evokes the strength of this classic theme which becomes an archetype through the centuries. The exhibition will develop according to three themes: landscapes and views of the city, Plossu and the Fresson process, Rome.

Plossu-Granet-ltalia discreta will be the occasion for the publication of a richly illustrated catalog by Editions Filigranes.

In partnership with the Rencontres Photographiques d’Arles.