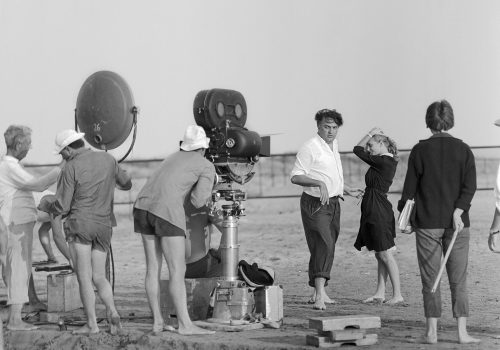 “I’ve photographed anyone who has given mankind something.” – Tony Vaccaro

Monroe Gallery of Photography presents a special exhibition celebrating the 98th birthday of renowned photographer Tony Vaccaro. The exhibit is on view November 20 through January 17, 2021.

Born in Greensburg, Pennsylvania on December 20, 1922, Tony Vaccaro spent the first years of his life in the village of Bonefro, Italy after his family left America under threat from the Mafia. His mother died during childbirth a few years before tuberculosis claimed his father.  By age 5, he was an orphan in Italy, raised by an uncaring aunt and enduring beatings from an uncle. By World War II he was an American G.I., drafted into the war, and by June, now a combat infantryman in the 83rd Infantry Division, he was on a boat heading toward Omaha Beach, six days after the first landings at Normandy. Denied access to the Signal Corps, Tony was determined to photograph the war, and had his portable 35mm Argus C-3 with him from the start. For the next 272 days he photographed his personal witness to the brutality of war.

After the war, Tony remained in Germany to photograph the rebuilding of the country for Stars And Stripes magazine. Returning to the US in 1950, Tony started his career as a commercial photographer, eventually working for virtually every major publication: Look, Life, Harper’s Bazaar, Town and Country, Newsweek, and many more. Tony went on to become one the most sought after photographers of his day.

As an antidote to man’s inhumanity, Tony focused his lens on those who gave of themselves: artists, writers, movie stars, and the beauty of fashion. By focusing on the splendor of life, Tony replaced the images of horror embedded in his eyes. This exhibition illustrates his will to live and advance the power of beauty in this life.

Now, age 98, he is recovered from COVID-19, and is one of the few people alive who can claim to have survived the Battle of Normandy and COVID-19. He attributes his longevity to “blind luck, red wine” and determination.

“To me, the greatest thing that you can do is challenge the world. “And most of these challenges I win. That’s what keeps me going.” He said recently in an interview with the Associated Press.

On December 20, Tony Vaccaro will celebrate his 98th birthday, an inspiration to us all.

A special short video tribute to Tony may be viewed on www.monroegallery.com along with the exhibition