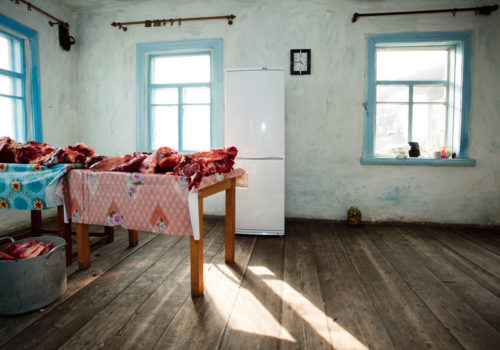 Chernobyl haunts our collective unconscious. It stands as a symbol of the horror that comes when arrogance supercedes humility and mankind puts itself before nature.

The Chernobyl disaster of 1986 is considered the worst nuclear power plant accident in history. By way of comparison, four hundred times more radioactive material was released than had been by the atomic bombing of Hiroshima. Though it has only been twenty five years, it is impossible to accurately assess the damage done to the population and ecosystem; disasters of this magnitude create mutations in DNA that will live for generations to come in the flora, fauna, and human populations.

The immediate response was to affect a quarantine state and in its wake came the creation of the Chernobyl Zone, a 30-kilometer exclusion zone around the site of nuclear reactor. In 2010 this site was designated as an exclusive environmental recovery area and it opened for a most unusual kind of business, disaster tourism, giving the public access to the zone to see the devastation first hand. Although there are still “hot spots” in the zone, visitors are taken on tours that give them select access to the devastated landscape and the abandoned town of Pripyat.

As the official site explains their purpose is the, “accordance [to] the information that is starting at first hand: from eyewitnesses of failure and evacuation, from researchers of a modern Zone of Alienation. We will tell about Chernobyl accident, its consequences, the past, the present and the future of Chernobyl’s land, in such a way, as any companies simply exploit a subject of Chernobyl is incapable to do.”

In short, Chernobyl Zone has become a laboratory, where scientists can study the effects of radiation on the earth to determine—well, exactly what they are learning from this disaster and how they are using it to protect life on earth is the real question that needs to be answered.

It is fortunate that not everyone who enters the zone is seeking to study the dark side of this story. Photographer Andrej Kremenstchouk gained access to the zone and the result is overwhelming. Chernobyl Zone (I) (Kehrer Verlag) is a magnificent work, a large format collection of images that are equally inspiring and terrifying their silence, for the book is without words to contextualize his journey through this new world. The cover bears no title, just the image of a river bend where the water does not seem to move and the edges are a vision of death. It is almost as though Kremenstchouk is our guide on the River Styx.

What becomes overwhelming is the way in which these images show us a world that we would not necessarily understand as the site of such a major disaster. Chernobyl Zone is a new kind of ghetto, a world of poverty and loss that belies the human spirit in the face of adversity. For though the disaster was created by one kind of arrogance, man at his heart is truly humble, and the people shown here are those who make the best of their world despite the odds.

Chernobyl Zone (I) is a guided tour into a semi-abandoned world where nature has begun to regenerate. The landscape slowly grows back and not far outside the zone, people have returned. They live here in simple homes with their dogs and horses, but in these images spirits and ghosts loom and lurk.

Perhaps the most disturbing image is the portrait of a woman whose face is ravaged by wrinkles, a roadmap of pain etched upon her visage. In front of her another photograph is held, as though by way of comparison. It is this same woman at perhaps twenty years old, a beauty by any estimate. Here, the promise of youth contrasts achingly with the truth of life; that in so many ways we have no control over our destiny, for the future is not ours to see until we live it, and by then, it is often too late.

On this scale, recovery we cannot quite comprehend, though we get the sense that help is something that is not being given. Death is part of the landscape, as evidenced by a moth laying dead upon a window; it looks as though it has been there for some time, no one bothered enough to remove it from their view. Yet life fights for itself and though this world is grim, there are moments of beauty that break through, for all we truly want in this life is love and happiness. Kremenstchouk includes beautiful still lifes taken within the homes of these people, while also sharing portraits of the people themselves, and their relationship to the land and their animals so that what we see is a kind of recovery of self, of triumph of the human spirit.