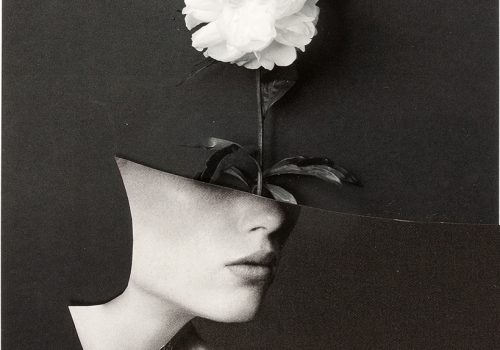 The collage “Third Eye” by Berlin artist Miriam Tölke (b. 1977), created early this year, introduces this week’s online exhibition. In combination with the photograph, the artist has selected a poem by Selma Meerbaum-Eisinger, who was 18 years old when she died of typhus at a Ukrainian labour camp in 1942. Her poems belong to the great literature of the world.

Mirjam Tölke’s pictures are poetry as well: complex, surreal, subtle and profoundly feminine. Some of the collages seem to “rhyme”; others assemble layer upon layer, sentence upon sentence, at times fading into infinity. “I take everything out of context, rearrange it, reconfigure loose pieces, mix materials and techniques, create a new order out of the chaos of abundance. I am a rambler, spend most of my time in the city and love studying people, places, gestures and movements. Nature gives me the horizon in front of which all parts come together.” Miriam Tölke, 2019.

The young Berlin artist joined the roster of photographers represented by the Bildhalle in late 2019 and has already made a successful appearance in two group shows. We had planned more extensive presentations at the Paper Position Berlin in May and at Photo Basel in June. Instead, we have the pleasure of announcing a one-minute video, which Tölke produced for us with filmmaker Britt Dunse, about her work and life in the studio at Uckermark, where she retired in the wake of the Corona crisis.

“Getting hold of the world in its fast pace and volatility, to grab scraps and put everything back together, for a moment of peace and inner retreat – this is one of the concerns that pursues Miriam Tölke in her photo collages. Miriam Tölke stacks everything in her studio, discovers, pulls individual leaves out of their bindings, rearranges them and cuts out first impressions as forms. Faces are halved, landscapes chosen – everything that is important to Miriam Tölke and what reflects her own impressions. Between Berlin and the surrounding countryside, the city itself as well as nature are a constant impulse for her. The pulsating, the compressed and the disturbing of a big city, the anonymity and hecticness through which one slides as a flaneur and absorbs moments in order to store them for oneself are just as relevant to the artist as the peace and harmony of nature outside of the turmoil.

The idea of harmony is transferred to her forms, which always come together and build up a new formation. Nothing bumps into each other or repels, but quite the contrary happens: as if it had never been otherwise, the landscape in the background suddenly becomes a dress or waterfall cut out of a pitcher. The well-groomed head opens in a surreal way, but only to present an insight into the inner landscape in the same well-formed way. The surface is broken – not just that of the image – and makes us realize that the horizon line can be where we put it.”

Miriam Tölke studied Painting at the Staatlichen Akademie der Bildenden Künste in Stuttgart. Nowadays, she lives and works as a mother of four in Berlin. The artist assembles images from magazines with found objects, scraps of paper or fragments from her accumulated picture archive. In this analog process, she collects, explores, and observes, placing her findings strikingly and minimalistically into a new context. Thus glossy pictures combined with landscape images become bizarre and irritating portraits that seem to reflect an inner world. A spiritual landscape, reflecting both the artist’s poetic way of thinking as well as today’s zeitgeist. In Tölkes pictures, there is always an element of calm, of pausing, which is initially unsettling, before unfolding its profound effect and finally eliciting a smile.

Click here for the one-minute video about the artist: ARTIST PORTRAIT MIRIAM TÖLKE

Gallery for classic and contemporary photography