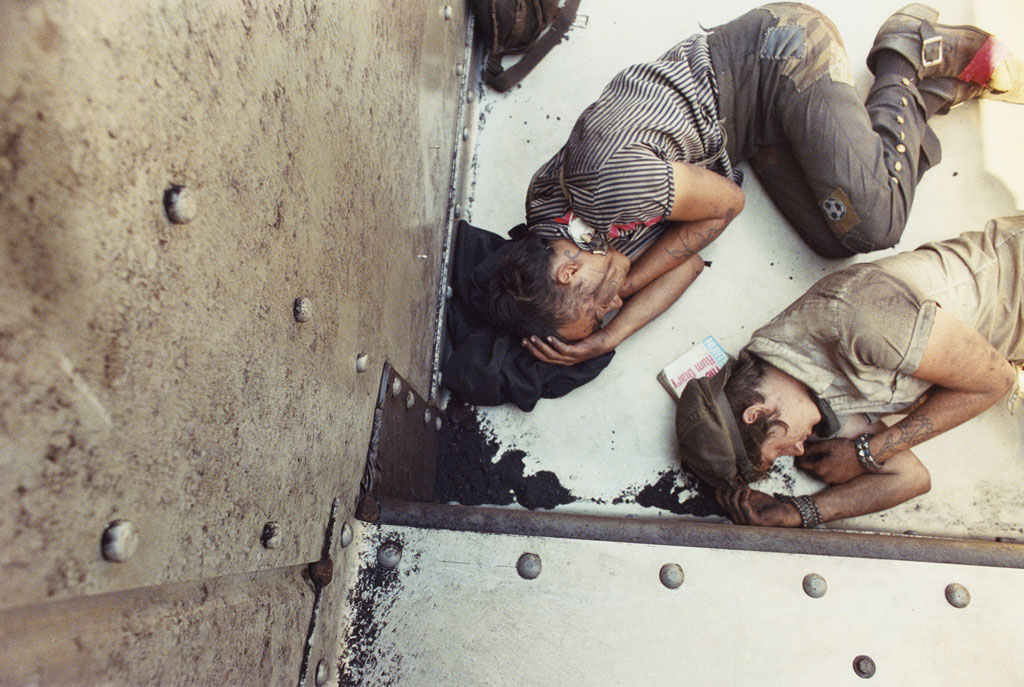 “Sometimes I take a train the wrong way…whatever happens a photo will come out of it, so it doesn’t really matter where I end up.”

“Mike Brodie spent years crisscrossing the U.S. amassing a collection, now appreciated as one of the most impressive archives of American travel photography. At 17 he hopped his first train close to his home in Pensacola, FL thinking he would visit a friend in Mobile, AL. Instead the train went in the opposite direction to Jacksonville, FL. Days later, Brodie rode the same train home, arriving back where he started. Nonetheless, it sparked something and he began to wander across the U.S. by any means that were free – walking, hitchhiking and train hopping. Shortly after, he found a Polaroid camera stuffed behind a car seat. With no training in photography and coke-bottle glasses, the instant camera was an opening for Brodie to document his experiences. As a way of staying in touch with his transient community, he shared his pictures on various websites gaining the moniker “The Polaroid Kidd”. When the Polaroid film he used was discontinued, Brodie switched to 35mm film and a sturdy 1980’s camera.” –Twin Palms

Mike Brodie doesn’t have a telephone, so I asked someone who asked someone who asked Mike Brodie a few questions about how he taught himself to make such well-crafted photos when he had never trained as a photographer. Brodie answered, “The first camera I used was a Polaroid 600, then a Polaroid Spectra. Neither of these cameras were giving me the results I wanted, so I got the SX-70 Sonar One-Step, arguably one of the best cameras ever made. I still have that original camera, it’s held together with tape and a bent paper clip. When I first started using it, each pack of Time-Zero film cost $15 dollars. I never was able to afford more than 2-3 packs at a time, so I had very few opportunities to get the right shot. When I would sit somebody down to do a portrait I would focus the camera over and over and over again, my face would start sweating and I would annoy the crap out of people. They didn’t understand why it was taking so long, but I didn’t want to waste film, I wanted to make sure the shot was just right. That same technique applied with 35mm film, and that’s what taught me to take good photos.”

Brodie wrote a compelling text for his new book, A Period Of Juvenile Prosperity. He explained how it came about, “I wasn’t thinking, I think that’s why I was able to express myself the way I did. I was under pressure at Jack Woody’s house. He told me to write something and handed me a book he did for Dennis Hopper 20 years ago. The intro Hopper wrote inspired me.”

Here is a short excerpt from Brodie’s afterward: “In the hottest part of the summer I hopped a train to New Orleans and photographed a girl named Ali. She was beautiful. Her hand was tattooed. Three days later New Orleans was trashed by a hurricane. I didn’t shoot photos of that…I moved to Philadelphia and tattooed my hand like Ali. Then I photographed this kid who liked my hand tattoo. I tattooed his hand like mine; maybe somebody tattooed their hand like his. Polaroid stopped making film, so I bought a Nikon for $150. I’ve ridden trains over 50,000 miles and taken over 7,000 photos. I won first place and $10,000 in a photo contest. I gave the money to my mom.”

When asked what his life is like now? Brodie answered, “Fighting the man” while chasing “the American dream.”

Special Books : Tones of Dirt and Bone by Mike Brodie