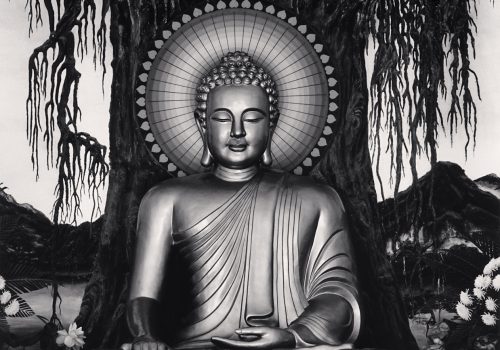 On his 50th birthday in 2003, Michael Kenna gave himself a gift: the pilgrimage of the 88 Buddhist temples to Shikoku, Japan. This present, at first glance, may seem rather strange from a man brought up in a rather strict Catholic family in the north of England. Wouldn’t it just be the same quest for spirituality, through the prism of another philosophy?

In 1987, Kenna visited Japan for the first time, for a private viewing of an exhibition of his work. He began to photograph Tokyo, Kyoto, Nara and discovered the complexity and creativity of Shinto statuary and imagery. He was initiated into Buddhism.

“… I was immediately mesmerized, especially by the enormous Vairocana Buddha at Tōdaiji temple in Nara. I was charmed by the immense power that emanated from this massive Buddha, as much as by his peaceful calm and serenity. This aroused in me immense curiosity. Until then, I had been rather ignorant of Buddhism. So I changed and felt the need to educate myself. During the following years, when I returned to Japan, I resumed my discovery of temples, shrines and museums. The temples in which I have walked, have often proved to be places with a seductive atmosphere, scented with exotic incense and filled with offerings of fruits, flowers and singular images. The chants and incantations, always in a language I did not understand, were punctuated by the sound of bells, and in Shinto shrines, by the clapping of hands. These places exerted on me a fascination and an attraction very close to what I had felt in the churches of my youth. They moved me deep in my being and I was captivated. I then started to read about Siddhârta Gautama and the origins of Buddhism, and I continued to photograph … “

From Japan, the photographer will continue his discovery in China, Hong Kong, Korea, Cambodia, Laos, Myanmar, Thailand and Vietnam.

Then, in 2018, the Guimet Museum in Paris opens its doors to him. Michael Kenna will direct his lens on some of the Buddhist art objects in this exceptional collection. There, he will be able to photograph works from Afghanistan, India, Nepal, Pakistan and Tibet, and thus complete his Buddhist “panorama”.

The idea for this book, which compiles his travel photos and pays tribute to the values ​​of Buddhism, was born during the quiet and silent photography sessions at the Guimet National Museum of Asian Arts.

“… I must state unequivocally that I am not an expert in Buddhist iconography and that this selection of images is very personal, it is not an exhaustive investigation.

At 66, despite the knowledge and experience I have gained, I still feel that I know so little about life and religions.

But despite the lack of understanding, the fascination of traveling, visiting places of worship, veneration and prayer, continue to exercise the same attraction on me….. ”

“There are more things in heaven and earth, Horatio, than what you dream of in your philosophy.” William Shakespeare, Hamlet.